Over 97% of the water on earth is unsuitable for human consumption due to its salinity. The vast majority (about 99%) of this is seawater, with most of the remainder consisting of saline groundwater (US Geological Survey, 2010). Purification of this saline water holds the promise of nearly unlimited water resources for human civilizations in coastal regions. However, purification of seawater is expensive, energy intensive and often has large adverse impacts on ecosystems. Despite these drawbacks, desalination can be an appropriate technological choice in certain settings. Technological advancements continue to decrease the economic and environmental costs of desalination (WHO, 2007).

Needs addressed: The need to reduce the impacts of drought in areas that may experience drought due to climate change. The needs are particularly high on small islands and other places that have limited freshwater resources.

There are three methods of desalination:

Desalination plants are being introduced in the Middle East and Mediterranean region, and the reverse osmosis method in particular is spreading rapidly.

Seawater desalination is a process in which salt and other constituents are removed to produce pure water. Approximately 75 million people worldwide rely on desalination and that number is expected to grow as freshwater resources are stressed by population growth and millions more move to coastal cities with inadequate freshwater resources (Khawaji et al., 2008). Desalination is most widely used in arid regions; more than half of the world’s desalination capacity (volume) is located in the Middle East and North Africa. Seawater accounts for over 50% of desalination source water worldwide. However, as of 2005 in the United States, only 7% of desalination plants used seawater. Brackish waters made up the majority of source waters for desalination, with most of the remainder consisting of river waters and wastewaters (Gleick et al., 2006).

Two streams of water result from desalination: (1) a pure product water and (2) a high-concentration waste stream or brine. The principal desalination methods fall into two categories: thermal processes (Figure 1) and membrane processes (Figure 2).Thermal treatment uses heat to evaporate the water, leaving behind the dissolved salts, or waste stream, and separating it from pure water. Membrane processes use reverse osmosis and high pressure to force saltwater through very fine, porous filters that retain the salts, leaving pure water on one side of the membrane and the waste stream on the other side. Since a great majority of earth’s water is found in the seas and oceans, desalination creates an opportunity for coastal communities to access virtually unlimited freshwater sources. In addition, desalination techniques can be used to purify brackish water in areas with seawater intrusion. In light of climate change adaptation, this is also a crucial resource for areas where existing freshwater resources can no longer support local populations or be rehabilitated to meet the freshwater demands. 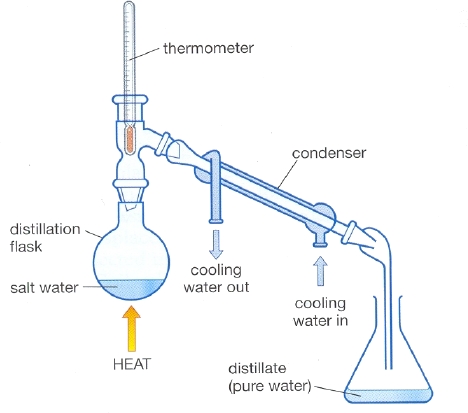 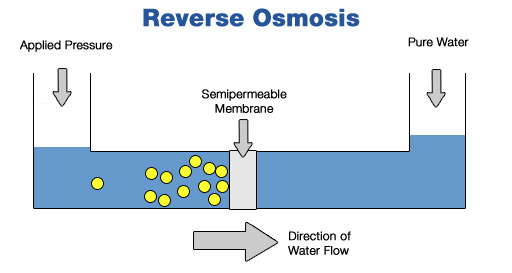 Thermal desalination processes generally use heat to evaporate water, leaving dissolved constituents behind. The water vapour is then condensed and collected as product water. Distillation is the simplest of these thermal processes and the energy efficiency of this simple process has been greatly improved (Foundation for Water Research, 2006). The most common thermal desalination process today is multi-stage flash (MSF) distillation; in 2005, MSF was reported to account for 36% of desalination worldwide (Figure 3). MSF improves on the energy efficiency of simple distillation by utilizing a series of low-pressure chambers, recycling waste heat and, in some cases, can be operated at even greater efficiency by utilising the waste heat from an adjacent power plant. Multiple-effect Evaporation (MEE) (also known as multiple-effect distillation) is another thermal process that utilizes low-pressure chambers; it is possible to achieve much greater efficiency in MEE than in MSF. However, MEE is not as popular (see Figure 3) because early designs were plagued by mineral scaling. Newer designs have reduced mineral scaling and MEE is gaining in popularity (Khawaji et al., 2008; Miller, 2003). For smaller operations with volume needs around 3000 m3/day, vapour compression distillation (VCD) can be an appropriate thermal distillation option. VCD is a technically simple, reliable and efficient process that is popular for resorts, industries and work sites where adequate freshwater is unavailable (Miller, 2003).

Membrane desalination processes utilize high pressure to force water molecules through very small pores (holes) while retaining salts and other larger molecules. Reverse osmosis (RO) is the most widely used membrane desalination technology, and represented 46% of global desalination capacity in 2005 (Figure 3). The name of the process stems from the fact that pressure is used to drive water molecules across the membrane in a direction opposite to that they would naturally move due to osmotic pressure. Because osmotic pressure must be overcome, the energy needed to drive water molecules across the membrane is directly related to the salt concentration. Therefore, RO has been most often used for brackish waters that are lower in salt concentration and, in 1999, only accounted for 10% of seawater desalination worldwide (Khawaji et al., 2008). However, the energy efficiency and economics of RO have improved markedly with development of more durable polymer membranes, improvement of pretreatment steps, and implementation of energy recovery devices. In many cases, RO is now more economical than thermal methods for treating seawater (Miller, 2003; Greenlee et al., 2009).

About 90% of global volume capacity for desalination is represented by the four thermal and membrane processes discussed above. Other desalination processes include electrodialysis, freezing, solar distillation, hybrid (thermal/membrane/power), and other emerging technologies (Figure 3). 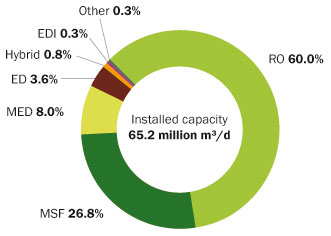 Electrodialysis (ED) utilizes current to remove ions from water. Unlike the membrane and thermal processes described above, ED cannot be used to remove uncharged molecules from source water (Miller, 2003). It is also possible to desalinate water by freezing at temperatures slightly below 0° C, but it involves complicated steps to separate the solid and liquid phases and is not commonly practiced. However, in a cold climate, natural freeze-thaw cycles have been harnessed to purify water at costs competitive with RO (Miller, 2003; Boyson et al., 1999). Interest in harvesting solar energy has led to significant progress on solar distillation processes. Hybrid desalination combining thermal and membrane processes and usually operated in parallel with a power generation facility is a promising emerging technology that has been implemented successfully (Ludwig, 2004; Mahmed, 2005). Nanofiltration (NF) membranes cannot reduce seawater salinity to potable levels but they have been used to treat brackish waters. NF membranes are a popular pretreatment step when coupled with RO (Greenlee et al., 2009).

Seawater desalination is most effective when implemented in water sectors with strong water policies, well-defined water resource availabilities and demand, and strong technical expertise. In regards to budget and local demand for freshwater resources, there are several options for desalination plants, water purification approaches, and potential energy sources for desalination (e.g. alternative energy such as wind). The characteristics of the saltwater, such as salinity, temperature, general level of contamination, etc greatly influences the choice of technology. For example, membrane processes are more suited for brackish water, which typically has lower salt concentrations. Pre-treatment (e.g. micro filtering of algae from sea water) may be needed before starting the desalination processes, as along with advanced deposition processes for the waste stream (including cooling where necessary). Monitoring and environmental impact assessment should also be instituted, depending on plant size and waste disposal methods.

Advantages of Desalination of Seawater

Disadvantages of Desalination of Seawater

A recently published review of desalination cost literature has shown that the costs are very much site-specific and the cost per volume treated can vary widely. Some of the factors reported to have the greatest influence on the cost per m3 include: the cost of energy, the scale of the plant, and the salt/TDS content of the source water (Karagiannis and Soldatos, 2008). Capital costs of construction are clearly a major consideration as well, but are almost entirely site-specific.

Climate change adaptation strategies must consider not only future climate forecasts but also future technological development. The costs associated with desalination continue to decline incrementally as technological efficiency improves. As mentioned above, it is also possible that a new technology will be developed that greatly decreases the costs of desalination.

Hybrid systems that use both evaporation and reverse osmosis have attracted much attention recently due to low costs, now below US$0.5/m3 of fresh water produced. On the other hand, high oil prices and tight supplies of metal can increase operating and construction costs, so it may be difficult to keep the cost of water production low in the future.

An 850,000 kW power plant and 178,000 m3/day seawater-to-freshwater facilities were newly constructed in Shuqaiq (a city near the Yemen border on the Red Sea side), and in 2010 started supplying Saudi Power and Water Company under a twenty-year contract. Total project cost: About 2 billion dollars

This was a new construction of a 2,000 MW power plant in the Mesaido Industrial District near Doha in Qatar. Total project cost: About 2.3 billion dollars

A World Bank report on desalination in the Middle East and Central Asia includes a chapter on capacity building (DHV Water and BRL Ingénierie, 2004). The major needs identified include the inadequacy of:

Training and formal education requirements for desalination are also discussed in detail.

The World Bank provides words of caution for those who believe that desalination is a panacea: “It may be preferable not to engage in desalination on a large scale unless the underlying weaknesses of the water sector are addressed... desalination should remain the last resort, and should only be applied after having carefully considered cheaper alternatives in terms of supply and demand management” (World Bank, 2005).

The environmental impacts of desalination must be weighed against those of expanding use of freshwater sources (e.g. groundwater depletion, diverting surface water flows) (Gassan, 2007). Although RO product water is almost totally pure, it is possible that some compounds of possible concern could get into product water; pre-treatment or post-treatment processes can be used to address the few compounds that are not removed well by RO (e.g., boron). A 20-page description of procedures for Environmental Impact Assessment (EIA) of desalination projects can be found in the World Health Organization guidance document (WHO, 2007)

Key issues for the spread of these technologies include reducing the cost of producing fresh water, stabilizing plant performance, and establishing easy procedures for plant operation, maintenance and management.

By securing new water resources, these technologies can make it possible to provide a stable supply of water for households and industry.

Desalination enables utilities in many water poor areas to access a nearly unlimited water resource. However, as discussed briefly in Section E, implementing desalination can sometimes exacerbate the problems of a poorly functioning water sector (WHO, 2007; World Bank, 2005). Therefore, the best opportunities for implementation are in water sectors that are functioning well, with well-defined water policy, well-characterized water resource availability and demand, technical expertise, and relatively little waste and inefficiency. Opportunities for desalination are greatest when:

This assessment is to be used as an indication only and is to be seen as relative to the other technologies included in this guide. More specific costs and timelines are to be identified as relevant for the specific technology and geography.

Flue Gas based Seawater Desalination pilot plant is an innovative, low-carbon intensive desalination system. This plant is first of its kind in India. In this facility, the waste heat from exiting flue gas in a fossil fired power plant is utilized for distillation of sea water instead of steam or electricity as used in conventional desalination system. This is a proof of concept facility. Once various elements of this technology are proofed and efficacy of the plant is established, this system can be replicated with or withouth scale up in other power stations.