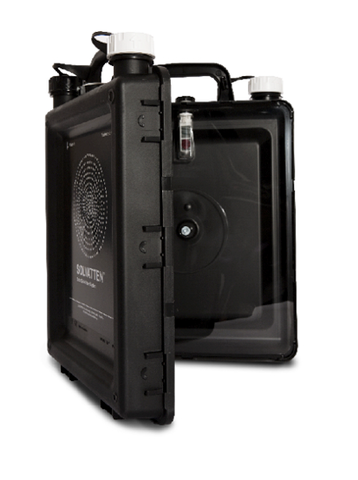 Access to freshwater is essential for our fundamental health and welfare. Water is also essential for sustaining agricultural productivity, and acts as a lubricant and coolant for many industrial processes. CTCN works to increase countries’ resilience to the impacts of climate change on water resources through partnering with organisations, research institutions and businesses. Together they provide established and innovative climate adaptation technologies such as water supply management using GIS, saline water purification and capacity building activities to strengthen vulnerability assessments in communities. Below you will find related publications, partners, CTCN technical assistance, technologies and other information for exploring this topic further.

Solvatten is a combined portable water treatment and water heater system that has been designed for off-grid households use in the developing world. It is an easy, innovative solution that gives access to clean, hot water to impoverished people throughout the world. Millions of primarily women and children need to walk dozens of miles every day to fetch water. Reducing the daily use of firewood and having a water source closer to home makes their lives so much easier. The unit has an average lifespan of 7-10 years, meaning it withstands those early years in which children are at their most susceptible to waterborne diseases.

It is well documented that solar energy can be an effective means of cleaning contaminated water. This is because ultraviolet (UV) light destroys the formation of DNA linkages in microorganisms, thereby preventing them from reproducing and thus rendering them harmless. Add the rapid heating of water and you have the exact process that occurs when Solvatten is used.

Another unique feature about Solvatten is that it creates hot water — up to 75°C. Water at this temperature is perfect for a number of household and hygiene purposes, such as cooking, hand washing, bathing and domestic cleaning. Users that want cooler water can simply place their unit in the shade once the water has been purified. Solvatten can be used on partly cloudy days but not during heavy rain or thick cloud cover.

1. Opened like a book: Each unit contains two five-litre containers, each of which can be filled with water via an opening that houses a fabric filter of 35 microns.

2. Fueled by the sun: The unit is then placed in direct sunlight, which simultaneously heats the water and exposes it to ultraviolet radiation.

3. Purified by radiation: The combination of heat and UV light is a highly effective means of purifying water and, depending on conditions, the water will be free of pathogenic material in 2-6 hours.

4. Cleared to use: An indicator tells the user when the treatment process is complete - a sad red face changes to a green and happy one.

Improved school attendance due to fewer sick-days and reduced reliance on children for domestic activities such as collecting firewood. Reduced vulnerability of women and children, who are often responsible for collecting firewood from isolated areas of bushland. Time saving, allowing people to persue more economically productive activities. Etc.