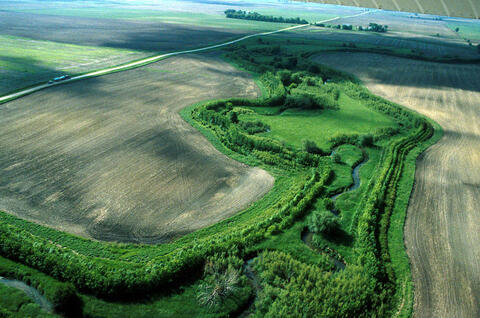 Riparian buffers are vegetated, often forested, areas (“strips”) adjacent to streams, rivers, lakes and other waterways protecting aquatic environments from the impacts of surrounding land use. To the extent possible riparian buffers should compose of native species and typically are divided in three zones with a total width of 15 to 200 meters. The first zone should consist of different grasses, a middle zone planted with bushes and a last part with large trees.

Riparian buffers help to maintain water quality in waterways by protecting streams from non-point source pollution. Riparian vegetation cover prevents sediments, as well as such pollutants as nitrogen, phosphorus and others from entering water through biological and physical-chemical processes. Vegetation and tree roots also stabilize banks and prevent erosion. Of special importance especially for developing countries is that riparian buffers during flood events help to slow down runoff by absorbing excess water, reduces peak flows and help to mitigate potential flood damage downstream.

Jobs would be created for the local communities not only in the creation of the buffer zones (growing trees) but also in the policing and protection of the zones.

Local communities could also invest in growing fruit trees as part of the buffer and harvest the fruits later for extra income.

Reduce public and private expenditures on climate related disaster management such as flooding from rivers overflowing the banks.

The use of riparian buffers to prevent nutrient leakage does not require large scale changes in land use and is relatively low-cost solution (compared to other approaches such as implementation of land use limitations or the construction of artificial wetlands for water purification). Relatively low cost solution.

The use of riparian buffer zones to reduce nutrient leakage operates making use of the natural ability of plants and trees to uptake nutrients present in the water. Riparian buffers help to reduce flood control through the combination of absorbing and slowing the flow of the runoff water.

The cost of establishing a riparian buffer will depend greatly in the extent required. Wider buffer zones are likely to provide more benefits in terms of preventing nutrient leakage, flood protection and erosion control. The costs would depend on a number of factors, though primarily on the extent of the riparian buffer zones required to meet the wRM objective, the present and planned land use and land ownership arrangements.

The timeframe depends greatly in the native species chosen to establish the riparian buffers, but usually fast growing species are used. Although the complete establishment of riparian buffers could take several years, water management benefits could be observed from the first year of establishment.

A good example could be Sweden, where riparian buffers have been used extensively to reduce nutrient leakage from agricultural fields. http://www.ncbi.nlm.nih.gov/pmc/articles/PMC4329156/

A report describing riparian buffer zones among other technologies can be found here
* http://www.unepdhi.org/-/media/microsite_unepdhi/publications/documents…
* http://recette.nwrm.eu/sites/default/files/nwrm_ressources/f1_-_riparia…
* http://www.ncbi.nlm.nih.gov/pmc/articles/PMC4329156/