According to the IPCC the main factors influencing change in the agricultural sector during the last four decades are population pressure, technological change, public policies, economic growth and the cost/price squeeze (IPCC, 2007).

A variety of factors cause agricultural lands to become degraded: excessive disturbance, erosion, organic matter loss, salinization, acidifcation, drainage or other processes that curtail productivity. Carbon storage within these soils can be partly restored by practices that reclaim productivity such as: a) enabling re-vegetation, for instance in the form of planting vegetation; b) improving fertility through nutrient amendmentsl c) applying organic substrates such as manures, biosolids and composts; d) reducing tillage and retaining crop residues and e) conserving water (IPCC, 2007).

Degradation of lands can result in the emission of greenhouse gases. Through restoration of lands, these emissions can be reduced.

A variety of mitigation measures to realize GHG emission reductions in agriculture are available. According to the IPCC, the most prominent options are improved crop and grazing land management, restoration of organic soils that are dained for crop production and restoration of degraded lands (IPCC, 2007). Other measures with lower but still significant emission reductions are improved water and rice management, set-asides, land use change, agro-forestry and improved livestock and manure management. Most of these mitigation opportuinities use currently available technologies and can be implemented immediately. However, the IPCC notes that, technological development will be a key driver ensuring the efficacy of additional mitigation measures in the future (IPCC, 2007). .

This description focuses on the restoration of organic or peaty soils and on restoration of degraded lands. Organic or peaty soils accumulated large quantities of carbon due to anaerobic decomposition of the organic matter. Anaerobic decomposition, or decomposition under absence of oxygen, occurs due to the flooded conditions of peatlands. When converted to agricultural lands the soils are drained, which removes the anaerobic conditions as it introduces oxygen into the soil. This process favours aerobic decomposition (decomposition with oxygen) which results in high CO2 and N20 fluxes (IPCC, 2007). Kasimir-Klemedtsson (1997) note that, although methane emissions are suppressed after draining of the soil this effect is by far counteracted due to the pronounced increase in N20 and CO2 emissions.

Peatlands are considered an especially important aspect of land management. This is due to the notion that although peatlands only cover 3 % of the land surface, they store more carbon than the vegetation of all the world's forests combined (peat portal assessment, 2008). This huge carbon stock of peatland ecosystems is atttributed to the often thick layers of peat, as illustrated in Figure 1. Peat consists largely of organic material and has a carbon content of over 50 % (peat portal assessment, 2008). 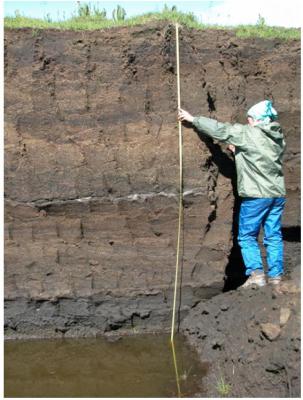 Freibaueret al., (2004) state that the most significant mitigation practice related to peaty and organic soils is avoiding the drainage of these soils or to re-flood the soils. The full restoration through increasing the water table is illustrated in Figure 1 and Figure 2. Other practices also contribute to lower emissions such as avoiding row crops and tubers, avoiding deep ploughing and maintaining a shallower water table, but these are less effective (IPCC, 2007).

Land degradation in general occurs due to a variety of factors. The IPCC, based on several papers, lists the following factors: excessive disturbance, erosion, organic matter loss, salinization, acidification or other processes that curtail productivity (IPCC, 2007). Carbon storage can be partly restored through practices that reclaim lost productivity such as: re-vegetation, improving fertility through nutrient amendments, applying organic substrates such as manures, reducing tillage, retaining crop residues and conserving water (IPCC, 2007).

Gorham and Rochefort (2002) outline the major goals of peatland restoration, the conditions that favor or oppose restoration and they assess restoration failures and successes.

The primary goal is to repair the eco-system itself. This includes the re-establishment of peatland hydrology, biogeochemical cycling and energy capture that will allow renewal of peat accumulation. An important operational necessity for peatland restoration is to act as soon as possible after the exploitation of the land has ceased. This minimizes degradation of the surface peat, which occurs through decomposition and compaction. Rewetting of the soil should be performed in a careful fashion as well as otherwise the water may cause erosion and frost-heaving. As such, Gorham and Rochefort (2003) note that it is essential to precede the restoration process with an accurate and detailed spatial evaluation of current hydrology of the soil, which should involve a study of peat structure, hydrologic conductivity and vertical seepage.

Another goal of restoration of peatland is stabilization of the peat surface. Stabilization can be done naturally by the use of plant species known to be effective, or artificially through the introduction of coarsely woven and biodegradable matting (Gorham & Rochefort, 2003). In the case that drainage has converted the open peatland into forest, which is the case in many drained peatlands, it is necessary to remove the trees.

Figure 4 illustrates the hydrological methods that are available to restore peatland areas.

As the Global Peat Restoration Manual (2008) notes, peatlands are complex systems due to three main characteristics. First, they consist of sophisticated interrelations of vegetation, water and peat. Second, they provide a wide variety of products and services. Finally, they can be damaged via a large variety of different actions.

According to the Global Peat Restoration Manual (2008), previous restoration practices of peatlands and wetlands have shown that restoration projects that depart from too simplistic an approach often fail to achieve their objectives. Basically, the manual notes that to realize succesful restoration it is important to realize that all relations of eco-systems can be brought down to two aspects: 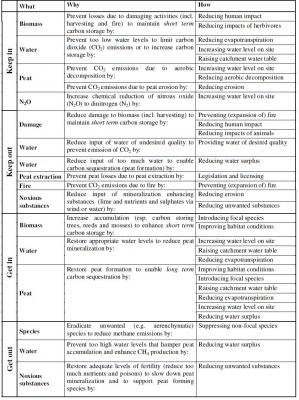 The technical mitigation potential per region for all management practices (i.e. restoration of degraded lands; cropland management; grazing land management/pasture management; management of agricultural lands) and all affected GHGs is shown in Figure 4. 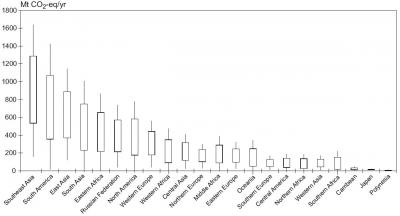 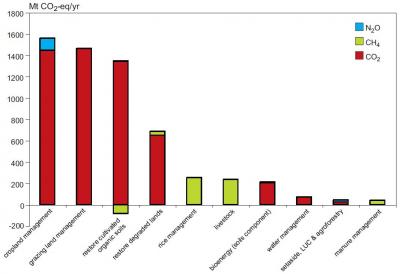 Figure 7: Global technical mitigation potential by 2030 of each agricultural management practice showing the impacts of each practice on each GHG. Source: IPCC, 2007; Smith et al., 2007

Peatland restoration and restoration of degraded lands contribute to socio-economic development and environmental protection. However, the exact magnitude of the effect depends on the scale and intensity of the mitigation measure taken as well as the sector and policy arena in which they are undertaken (IPCC, 2007). As a preliminary indication, Figure 6 shows the sustainable development benefits from all land management techniques differentiated over the social, economic and environmental factors.

While Figure 8 is relatively rudimentary, several possible benefits can be noted from the restoration of degraded lands and peatlands. First, restoring degraded lands and peatlands improves biodiversity. Second, peatlands purify water and can therefore be regarded as an important water supply source. Third, restored (peat) lands can be more effectively used as flood mitigation areas. Fourth, restored peatlands have been shown to significantly reduce fire risk (peat portal assesment report, 2008). Finally, due to aestetic quality of fully restored peatlands and other degraded lands, sustainable development can be supported through eco-tourism activities.

Restoration of organic soils therefore has a variety of biodiversity and environmental co-benefits. However, the economic impact depends upon whether farmers receive payment for the GHG emission avoidance and reductions achieved. Market based mechanisms might be able to support restoration of peatlands and degraded lands as they add carbon valuation. Restoration of degraded lands will provide higher yields and economic returns, less new cropland and provide societal benefits via production stability. 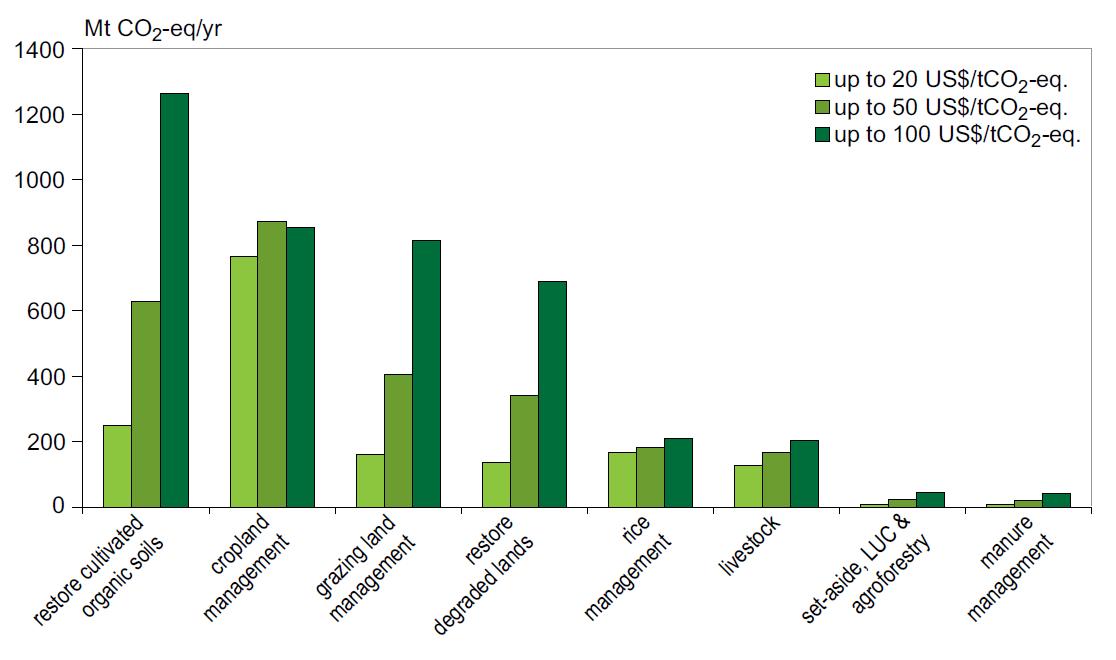 The role of alternative strategies changes across the range of prices for carbon. At low prices, dominant strategies are those consistent with existing production such as changes in tillage, fertilizer application, livestock diet formulation, and manure management. Higher prices elicit land-use changes that displace existing production, such as biofuels, and allow for use of costly animal feed-based mitigation options. A practice effective in reducing emissions at one site may be less effective or even counterproductive elsewhere. Consequently, there is no universally applicable list of mitigation practices; practices need to be evaluated for individual agricultural systems based on climate, edaphic, social setting, and historical patterns of land use and management.

Currently, degraded land restoration and peat land restoration do not fall under the Clean Development Mechanism. For more information on the CDM baseline establishment and latest news see: [[1]]