FUMIN COATING manufactured by FUMIN Co., Ltd. is a patented agent that protects glass surfaces from ultraviolet rays and infrared rays. With a commercially available spray gun, the agent can be applied to form a thin transparent metal oxide layer evenly on a glass surface. FUMIN COATING is long-lasting and blocks 90% of ultraviolet rays and 70% of infrared rays to protect your skin and prevent your interior from sun damage without compromising visibility.

Great visibility can be achieved with FUMIN COATING. It forms a layer of 1.5 microns thick. With conventional coating agents that are applied with a sponge, brush, or roller, visibility is compromised because they form a layer of 7 to 10 microns thick and the layer may not be evenly formed. The visible light transmission of FUMIN COATING is about 85% so that appearance and interior brightness are not likely to be affected.

FUMIN COATING works as a bug repellent. It keeps glass surfaces from insects with compound eyes such as moths, horse-flies, bees, and stink bugs. These insects tend to fly towards ultraviolet rays that are given off by fluorescent lamps near glass. FUMIN COATING blocks UV-rays to keep these bugs away.

A glass coated with FUMIN COATING absorbs heat (far infrared ray). If FUMIN COATING is applied on a car windshield and windows, heat is kept inside the car. A 2℃ drop in temperature is considered to save 20% of energy. The agent helps saving energy and is good for the environment.

FUMIN COATING remains effective for ten years. Unlike other similar products, frequent re-coating is not required. FUMIN COATING resists heat crack as it expands in the same ratio as glasses. It also resists scratches by providing hardness to a glass surface.

If outside temperature is 15 degrees cooler than inside, a coated glass may look foggy. However, water droplets would not be seen on a glass coated with FUMIN COATING. FUMIN COATING works as an antimicrobial agent by preventing condensation, which promotes bacterial growth.

FUMIN Co., Ltd. has successfully invented the spray coating agent to form an ultra-thin transparent layer with many advantages. FUMIN COATING is patented both in Japan and other countries.

Save heating energy: In cold winter, the area near a window is felt cool due to cool radiation even when the room is heated. A glass coated with FUMIN absorbs the heat (far infrared ray) inside the room and thus solves the cool radiation problem.

Prevent incoming insects: Insects with compounded eyes such as moths, horseflies, bees, and stink bugs have a habit of flying toward ultraviolet ray radiated from a fluorescent lamp. By shutting off the ultraviolet ray, the coating can prevent those insects from approaching near the glass.

Easy application: The FUMIN coating can be applied to any types of glasses that cannot be coated with a film, such as wire glass, curved glass, large glass, and frosted glass, whether it is outdoor or indoor.

Extremely clear visibility after applying FUMIN COATINGTM is because it is forming ultra thin transparent film of 1.5 microns thickness. It is possible to apply on big size, curved or bumpy surface glasses and polycarbonate etc. It is patented ultimate spray coating technology and a perfect solution for car window both with glass and polycarbonate.

Although similar coating applications are available with sponge, brush or roller, forming flabby or blurred film of approx. 7–10 microns thickness by such methods, the visibility through glass is obviously degraded to poor. These are impossible to apply on big size, curved or bumpy surface glasses.

It has been believed that only vacuum deposition method makes possible to form a transparent thin-film as normal spray coating is for painting colors and not possible to have a transparent finish with such equipment. We successfully invented the method of forming ultra thin transparent film with a commercially available spray gun, and then the Patent has been granted in Japan following by various countries. 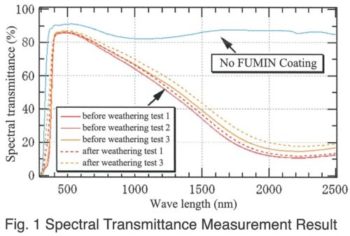 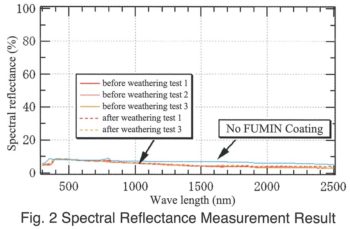 *Note: Numbers are expediently put on every piece of three test samples submitted (n=3) in order to take two pieces (n=2) i.e. one showing the highest percentage and the other showing the lowest percentage as different results have been expected from three test samples. The transmittance and the reflectance measurement before and after Accelerated Weathering Test were done on the two samples (n=2).

Number of construction5,000
Track record years10 years
Fumin coating was selected for The National Art Center, Tokyo by recommendation from world famous Japanese architects to provide comfort to visitors and art lovers. We completed this project of 4,700 square meters glasses within two weeks. In the section of schematic illustration, a picture of the National Art Center is shown.
In cases in Singapore, it was verified that this technology reduced the temperature within an elevator by 2 degree Celsius. A reduction of heat by 2 degree Celsius is said to be an energy saving of 20%. If we coated the window panes of buildings in the areas of the world where sunlight is intense by employing people for the work as a job-creation measure, an approximately 20% energy saving would be attained semipermanently.

Nothing, especially since I am constructing supposing all environments.