Mebiol, Inc. has invented a film called “Imec” made of hydrogel for growing vegetables with less water. Using this method, agriculture can be done virtually anywhere -- even on desert land or concrete. The film prevents harmful viruses and germs from getting in, rendering pesticides unnecessary. The film also creates a “water stress” that helps crops such as tomatoes synthesize large amounts of sugar, amino acids, and other nutrients. This, in turn, leads to more natural sweetness and higher nutritional value. In addition, Imec eliminates soil contamination that can negatively impact crop productivity and quality.

Imec was invented by Dr. Yuichi Mori, Founder. He did so after 30 years of developing membranes and hydrogel technologies that are utilized in dialysis membranes, catheters, artificial blood vessels, and other forms of medical equipment. He wanted this invention to stabilize food supplies and address safety issues created by water shortages and soil contamination as a result of global warming.

At its core, Imec film encourages plants to make a large number of capillary roots so as to more efficiently take in nutrients. 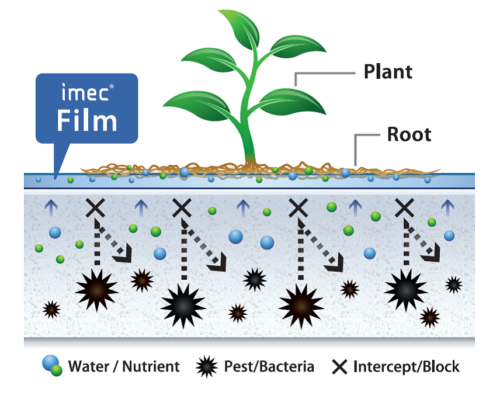 I. Reduces Water Consumption
Imec reduces water consumption to less than a quarter of what is needed for hydroponic farming, and 1/10 of conventional farming using soil. The sugar content in Imec tomatoes, for example, is nearly twice that of hydroponic tomatoes.

II. Use in Barren Areas
Imec can produce results even in barren areas that lack agriculture, such as areas of Japan that have been devastated by tsunamis. It can even be used in the soil-contaminated suburbs of Shanghai or in hot and unforgiving Dubai deserts.

III. Easy to check the roots of plants
Because capillary roots are so crucial for healthy plants, they need to be at their best to yield quality crops. With Imec, it is easy for anyone to check the density and color of roots. This offers a better way to diagnose any potential problems that may exist in crops like tomatoes.

We invented a film made of hydro-gel for growing vegetables with less water. This method (called Imec) allows for agriculture anywhere, even on desert land or concrete. Since the film blocks harmful viruses and germs, pesticides are unnecessary. Better yet, the “water stress” the film creates induces crops like tomatoes to synthesize large amounts of sugar, amino acids, and other beneficial nutrients, leading to greater sweetness and higher nutritional value. Imec also eliminates the soil contamination that affects the productivity and the quality of crops.

Using Imec reduces water consumption to less than a quarter of hydroponic farming. The sugar content in Imec tomatoes is almost twice as much as that of hydroponic tomatoes. Imec “makes visible” the condition of roots that could not be seen with conventional agricultural technologies. A very large number of capillary roots grow when using Imec. Capillary roots are highly important organs for plants, and they affect the health of crops, influencing both yield and quality. Seeing the amount of roots and their color and the amount of water and nutrients absorbed is an effective way to understand the condition of the tomatoes and diagnose any potential problems. By using Imec film—a uniform industrial product—instead of soil, even inexperienced individuals can learn reproducible agriculture in a short period of time.

Using Imec reduces water consumption to less than a quarter of hydroponic farming. The sugar content in Imec tomatoes is almost twice as much as that of hydroponic tomatoes.

Imec was introduced for the first time in Japan in 2008. The diffusion area now has reached over 40Ha and is still expanding. Taking advantage of the characteristic of Imec that can produce high-quality crops even barren areas without agriculture, people are starting to produce high-quality tomatoes in the devastated areas by Tsunami in Japan, in the suburbs of Shanghai where the soil contamination is concerned, and in the Dubai desert areas. 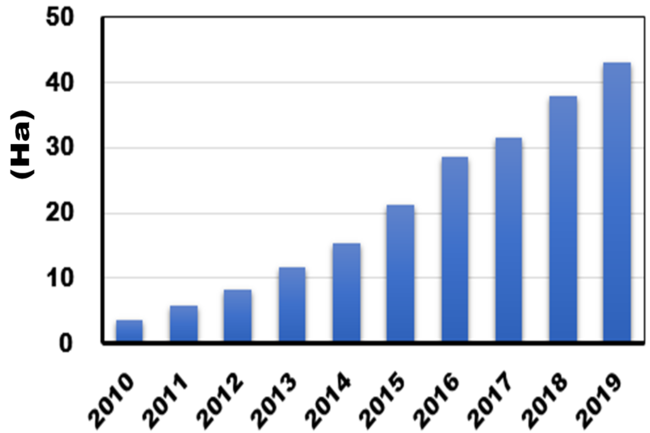 Farmers are conservative to adopt new technologies. More than 60% of our customer base comes from manufacturing and other non-agricultural industries.