The CTCN returns from a successful COP27 in Sharm El-Sheikh

The CTCN returns from a successful COP27 in Sharm El-Sheikh 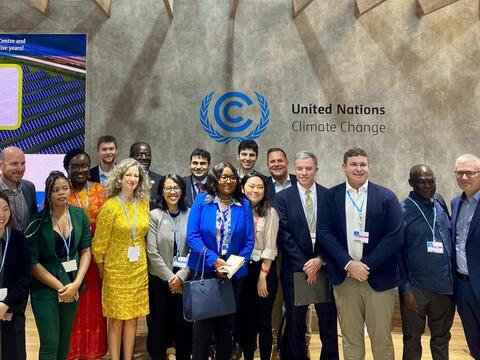 The CTCN has now returned from a busy and productive two weeks at COP27 in Sharm El-Sheikh. CTCN Secretariat staff led, co-led, or contributed to over 30 events bringing together over 240 speakers from around the world, and conducted several bilateral meetings with Parties, negotiating blocks, and key partners, while hosting a dedicated pavilion for the Technology Mechanism.

Most importantly, the Technology Mechanism launched its first-ever joint programme of work for 2023-2027 with a high-level launch event featuring Inger Andersen, Executive Director of UNEP, and Simon Stiell, UNFCCC Executive Secretary, along with senior government officials from Canada, Chile, European Commission, Germany, and the United States who provided congratulatory remarks while announcing new financial contributions to the Technology Mechanism.

The Technology Executive Committee (TEC) and Climate Technology Centre and Network (CTCN) – the two bodies of the Technology Mechanism under the UNFCCC and Paris Agreement – launched this joint work programme to accelerate the deployment of transformative climate technologies that are urgently required to tackle climate change.

“The launch of this joint work programme is an important opportunity for us to step up efforts rapidly to deploy technology to address mitigation and adaptation,” said Inger Andersen, Executive Director of UNEP.

The joint work programme plans for specific joint activities to be implemented by the TEC and CTCN, including technology roadmaps, work on gender and technology, technology and NDCs and digitalization, and common areas of work for the two bodies, including national systems of innovation, industry, and the water-energy-food nexus.

“Time is running out to achieve the key goals of the Paris Agreement. The rapid scaling up and effective transfer of climate technologies is imperative to limit the global average temperature rise to 1.5 degrees Celsius and to build resilience to climate change. A reinvigorated Technology Mechanism is needed to unlock appropriate climate technologies everywhere in the world, and that is what this new work programme is designed to achieve,” said Simon Stiell, UNFCCC Executive Secretary.

The CTCN also launched its own new work programme for 2023-2027. The third programme of work will continue delivering on its mandate to respond to country-driven requests, while aiming to enhance transformational impact and scale across its core service areas through two proven technology enablers (national systems of innovation and digitalization) and five system transformations (water-energy-food nexus, buildings and infrastructure, sustainable mobility, energy systems, and business and industry).

Substantial text on technology and the joint work programme was included in the COP and CMA decisions. In the Sharm el-Sheikh Implementation Plan, the COP “welcomes with appreciation the first joint work programme of the TEC and the CTCN,” and “invites Parties and stakeholders to cooperate and engage with the Technology Executive Committee and the Climate Technology Centre and Network to support the implementation of the joint work programme activities, including on technology needs assessments, action plans and road maps, acknowledges the findings in the final report on the first periodic assessment of the effectiveness and adequacy of the support provided to the Technology Mechanism in supporting the implementation of the Paris Agreement and decides that the main challenges identified therein should be considered under the global stocktake.”

The COP also “highlights the importance of cooperation on technology development and transfer and innovation in implementing the joint work programme activities” and “welcomes the forward-looking conclusions of the Subsidiary Body for Implementation to continue consideration of the Poznan strategic programme on technology transfer at its sixty-first session (November 2024) with the aim of supporting the implementation of relevant activities, such as those identified and prioritized in developing countries’ nationally determined contributions, national adaptation plans, technology needs assessments and technology action plans, and long-term strategies.”