Artificial growing of coastal knolls in width and in height
END_OF_DOCUMENT_TOKEN_TO_BE_REPLACED 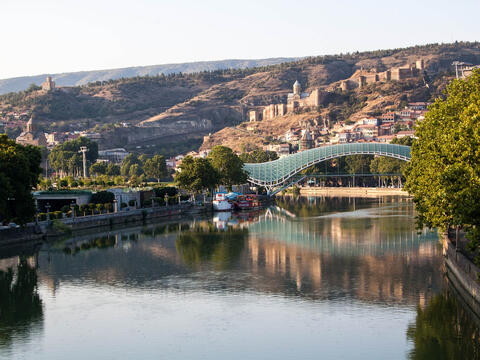 Georgia has seen in the past years a rise in extreme climate-related events. Over the past four decades, 70 percent of its territory experienced a natural hazard, with economic losses exceeding $14 billion. Floods occur very frequently and have compounding effects, as over half of the country is predisposed to landslides and nearly half is at risk of mudflows and landslides.

Flooding represents a major problem in the steep Leghvtakhevi- Dukniskhevi River basin. The National Environmental Agency of Georgia requested an assistance from the Climate & Technology Centre and Network (CTCN) to assess suitable flood mitigation measures around Tbilisi, carried out through the analysis of the extreme flood risk of the Dukniskhevi river.

This assistance has provided Georgia and the city of Tbilisi with suitable training on how to conduct cutting edge flood risk analysis and mitigation planning. The technologies supported through the assistance involved hydrological and hydraulic modelling together with flood management and mitigation techniques. The forecast of the climate change impact in regards to Leghtakhevi basin was successfully established. Suitable methodologies and technologies for flood modelling and mapping were identified to produce different reports that would serve as guidelines for flood risk management measures. This also provided a pilot case to upscale received products and recommendations to other catchments in the country.

Following the consultations with stakeholders, collecting the most precise and relevant data was a priority and presented some challenges. The experts from network HYDROC and Environment and Development assisted in modelling simulated flooding/flash floods in the catchment through data interpretation, model calibration, hotspot identification, as well as defining flood risks.

With the lessons learned, the National Environmental Agency of Georgia and the Tbilisi city council have increased capacity to implement appropriate flood management measures in the city. This can be supported through the creation of a Flood Risk Management Committee that would act to close the data gap and upscaling the project to other at-risk catchments. Furthermore, the project can support improved planning in the region, such as updating masterplans and emergency response plans, including climate-change risks at the decision making through the dissemination of flood maps, and highlighting the need of improving bottleneck infrastructure.