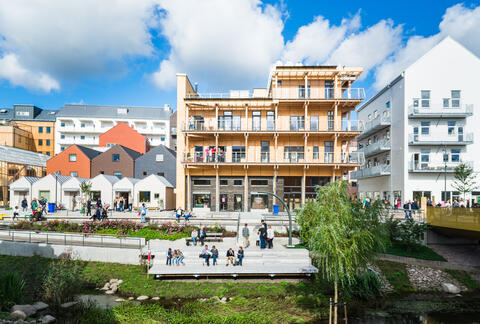 Vallastaden is an unusual city district whose new model for planning and building has led to an urban environment centred around the residents. With its strong focus on social, ecological and economic sustainability, Vallastaden is an inspiring example for future urban development. Vallastaden in Linköping, Sweden, is a newly built city district that’s unique in how it challenges the traditional way of building cities. The entire district has been planned and built with an emphasis on social and ecological sustainability, which includes listening to and involving residents. Below are some of the innovative ideas and processes that make Vallastaden an inspiring place for building tomorrow’s sustainable city.

<h2> Quality-based criteria </h2>
The process itself, which focuses on social and ecological sustainability, has constantly evolved, resulting in a new approach to social planning known as the Vallastaden Model. One of its innovative aspects is the sale of land based on quality criteria and not just price, which allows a diverse range of developers to be part of the project. As a result, nearly 1,000 homes have been built by 40 different developers, all in record time.

This is one of many methods that have made Vallastaden a vibrant urban district centred around its residents, with a variety of architectural styles that’s rare in most new city districts. Within a single block you will find a mix of detached and terraced houses, apartment buildings, student housing and commercial spaces. No single architect has designed two adjacent houses. This kind of diversity is key to making the area a dynamic and attractive environment for both residents and businesses.

<h2> Designed for fossil-free energy and transport </h2>
Ecological considerations were included in the planning by awarding developers quality points for environmentally sustainable features such as solar panels or solutions for returning electricity to the grid. The city district is also designed to encourage cycling and walking instead of taking the car, for example by locating car parks on the outskirts of the district, providing generous cycle and foot paths, and facilitating public transport.

<h2> ‘Infraculvert’ system for all pipes and lines </h2>
A new way of laying pipes was also developed, offering several sustainability benefits. The densely built urban environment and difficult soil conditions made it hard to lay pipes in Vallastaden using traditional methods. The solution was to install all pipework and lines for all media in an underground culvert system, which included pipes and lines for electricity, fibre optic internet, district heating, sewerage, water and automated vacuum collection. This approach makes it possible to install, operate and maintain pipes with less damage to the ground. Although investment costs for the system are higher than for traditional pipe-laying, the life cycle cost is lower.

Like many of the innovations and ideas in the Vallastaden Model, the infraculvert system has proved to be a smart and flexible solution that takes another step towards tomorrow’s sustainable cities and regions.