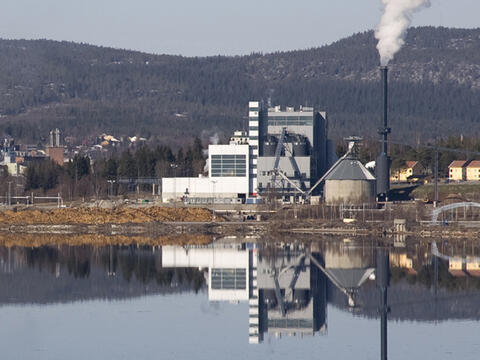 Hörneborgsverket, a biofuel-based cogeneration plant, is at the heart of Övik Energi’s energy production. Hörneborgsverket produces roughly equal amounts of district heating, steam, and electricity. Some 99% of the fuels used at the plant are renewable, and the steam is distributed to local industries. Cogeneration plants, also known as combined heat and power plants (CHPs), which use a single fuel source to produce both energy and heat, convert almost all energy into useful energy. This in contrast to conventional power plants, which release heat without using it. District heating has a number of benefits; besides the possibility of substituting electricity with other heating sources, it can also generate electricity with minimal wasted energy.

<h2> Steam provider for local industries </h2>
The steam produced at Hörneborgsverket is distributed to neighbouring process industries. Due to the industries’ need for steam, which is in demand throughout the entire year, the cogeneration plant is used more than power plants that only supply district heating, for which demand fluctuates.

Hörneborgverket also purchases residual products from the Domsjö Fabriker biorefinery to use as fuel in the plant. Using fuel from waste material from a nearby industry not only brings added sustainability benefits but also reduces transport requirements.

<h2> District cooling from the local bay </h2>
As well as heat, industries and buildings, of course, also need cooling. Their cooling needs are met using cold water from the seabed of Övik bay, providing district cooling for both Hörneborgsverket and manufacturing industries, industrial plants, and other buildings within the Domsjö industrial area. The sea water is taken from a depth of 25 meters and the plant is one of the country’s largest suppliers of district cooling. The technology is an eco-friendly, low-carbon way of generating cooling for both people and machinery.

<h2> A knowledge centre for CHP and district cooling </h2>
Hörneborgsverket is an interesting subject for learning more about how a biofuel-fired cogeneration plant works and the sustainability mindset of the entire business. It also offers the opportunity to learn more about district cooling and its positive effects for the environment and economy.