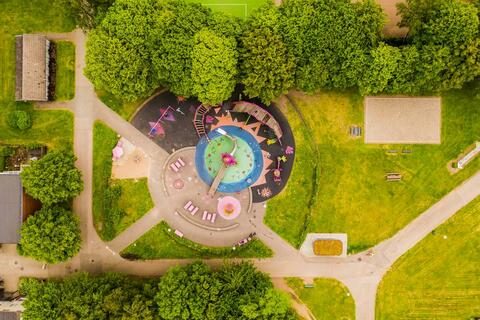 In the Drottninghög neighbourhood of Helsingborg in southern Sweden a transformation is underway, from a run-down district to an attractive, sustainable part of the city. This change is based on close dialogue between residents, real-estate companies and the City of Helsingborg. The project started with numerous discussions with one-third of Drottninghög residents. More than 300 interviews were carried out, with the purpose of collecting and listening to people’s preferences, needs and hopes about their neighbourhood and environment. Since then, dialogue and supportive relationships have been a key factor in developing the area together with residents.

<h2> Closer ties to the city </h2>
Several initiatives have made Drottninghög more connected to the rest of Helsingborg. Firstly, the City of Helsingborg put significant resources into making a state-of-the-art playground. This has increased residents’ pride in the district and also resulted in families with young children traveling from other parts of the region to visit the playground, which creates a positive flow of people.

Secondly, a major shirt retailer in Helsingborg decided to build its new headquarters in Drottninghög, where the area’s first office space also adds to the movement and diversity of people. The City of Helsingborg also invested in a new bus transit solution, Helsingborg Express, which covers a large part of the city. This makes the journey from the centre to Drottninghög both faster and easier for residents and visitors.

<h2> Residents developing public spaces </h2>
Many of the public spaces in Drottninghög have been developed by or together with the people who actually live there. For example, residents run their own urban garden, supported by the municipality. Although the garden is mainly used and looked after by local residents, it’s open to everyone, to grow vegetables and join in the yearly harvest party.

<h2> Better quality of life </h2>
Thanks to the transformation and involvement of the inhabitants, Drottninghög has become a much more vibrant and attractive area, in which a variety of new stakeholders are engaging in local social, environmental and financial development. Together, these measures and ideas boost quality of life, increase public safety, improve school results and have added over 300 new jobs to the neighbourhood.

The city’s public housing company Helsingborgshem won the prestigious ‘Bopriset’ prize in 2018 for its development of Drottninghög with strong consideration of residents’ views, needs and wishes.