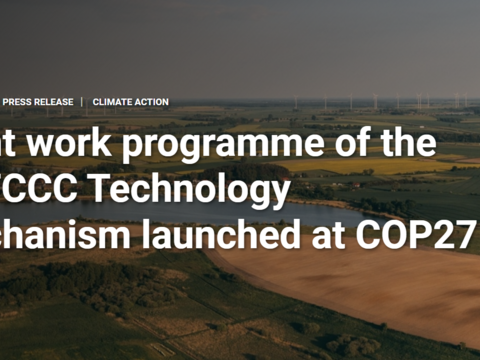 The Technology Executive Committee (TEC) and Climate Technology Centre and Network (CTCN) – the two bodies of the Technology Mechanism under the UNFCCC and Paris Agreement – launched their joint work programme to accelerate the deployment of transformative climate technologies that are urgently required to tackle climate change.

“The launch of this joint work programme is an important opportunity for us to step up rapidly efforts to deploy technology to address mitigation and adaptation,” said Inger Andersen, Executive Director of UNEP.

The new joint work programme of the Technology Mechanism covers work from 2023-2027. It foresees specific joint activities to be implemented by the TEC and CTCN, including technology roadmaps, work on gender and technology, technology and NDCs and digitalization, and common areas of work for the two bodies, including national systems of innovation, industry, and the water-energy-food nexus.

Visit the photo gallery from the event.

“Time is running out to achieve the key goals of the Paris Agreement. The rapid scaling up and effective transfer of climate technologies is imperative to limit the global average temperature rise to 1.5 degrees Celsius and to build resilience to climate change. A reinvigorated Technology Mechanism is needed to unlock appropriate climate technologies everywhere in the world, and that is what this new work programme is designed to achieve,” said Simon Stiell, UNFCCC Executive Secretary.

This joint work programme is a significant milestone for the Technology Mechanism and signals a new era of work for climate technology under the Convention and the Paris Agreement. It is guided by science, aligned with the long-term goals of the Paris Agreement, and focused on high-potential sectors and high-impact actions.

The United States announced today a contribution of USD 3 million to support the implementation of the Joint Work Programme.

U.S. Special Presidential Envoy for Climate John Kerry stated: “The UNFCCC Technology Mechanism is galvanizing action in this decisive decade through smart technology solutions for climate resilience and mitigation. With this contribution, the United States is supporting a new, strategic approach to cooperation on technology and innovation in developing countries and fulfilling a key pledge made at COP26.  The United States helped lead the development of this first joint work programme for the Technology Mechanism in support of the Paris Agreement Technology Framework. We are committed to ensuring that the Parties cooperate effectively to accelerate action at the scale and pace needed through research, development, demonstration, and deployment of climate technologies.” 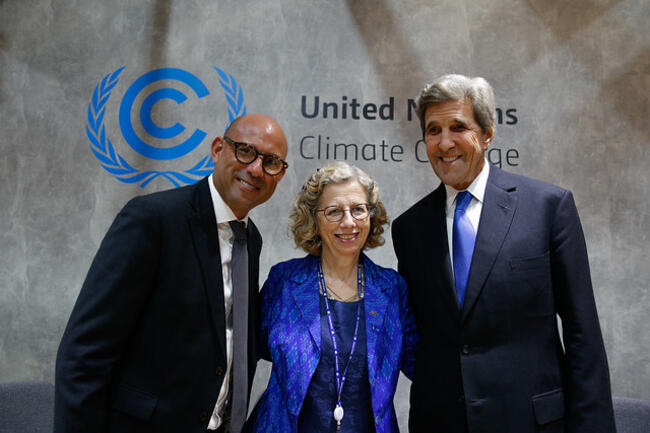 Executive Vice President of the European Commission Frans Timmermans said: “Technology transfer is crucial for the success of the global green transition. Whether it’s in energy, infrastructure, mobility or food: we need to make sure that knowledge is shared to help build up industrial capacity and support developing countries to tackle the climate crisis. The new joint programme for the UNFCCC Technology Mechanism opens up new possibilities for innovation and targeted action. The European Commission will continue its support in years to come by providing a new EUR 2 million contribution to the Climate and Technology Centre and Network.”

Parliamentary State Secretary at the Federal Ministry for Economic Affairs and Climate Action Stefan Wenzel underlined Germany’s support and announced a voluntary contribution of EUR 1.5 million to CTCN and EUR 500.000 to TEC in 2022: “Accelerated and fast deployment of climate technologies is a highly important building block in the set of solutions for transformational change necessary to reach the targets of the Paris Agreement and the Glasgow Climate Pact. For this purpose, Germany supports the TEC and CTCN in implementing their joint work program and the targeted sectoral transformation on mitigation and adaptation. The new joint work programme marks an important milestone in the further development of the Technology Mechanism.“

In addition, the Canadian government has confirmed a CAD 6 million grant to the CTCN. Canada’s Natural Resources Minister, the Honourable Jonathan Wilkinson, stated: “While technology itself is not a climate plan, any serious approach must include thoughtful consideration of how to develop and deploy critical clean technologies. This new Joint Work Programme will help governments and other actors around the world collaborate to do just that.”

As a longstanding donor, the government of Japan has committed to continue its current level of funding for the CTCN. The CTCN is pleased to strengthen its collaboration with the Republic of Korea through the recent establishment of its Partnership and Liaison Office in Songdo, Republic of Korea.