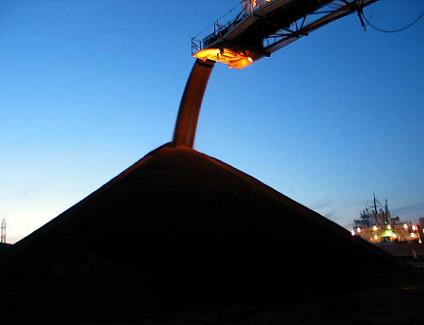 Definition:
In industrial chemistry, black liquor is the waste product from the kraft process when digesting pulpwood into paper pulp removing lignin, hemicelluloses and other extractives from the wood to free the cellulose fibers.

Black liquor gasification is an emerging commercial technology founded on decades of research and development. Its goal is to produce a combustible mixture of raw gases as well as separate out the inorganic pulping chemicals for recycling for the pulping process. The processes can take place at low, 600 degrees Celsius, or high temperatures around 1000 degrees Celsius.

The predominant form of biomass energy available at pulp mills today is black liquor, the ligninrich byproduct of fiber extraction from wood. Black liquor contains about half the energy of the wood input to a kraft pulp (see Wikipedia: kraft process) mill, along with all of the spent pulping chemicals (Na2 and NAOH) used in the kraft process, the predominant process for pulp production. Pulp mills have used black liquor as an energy source since the 1930s. At pulp mills today, black liquor is burned in so-called Tomlinson recovery boilers to generate steam and recover pulping chemicals for re-use. The steam is expanded through a turbine to make electricity that meets a portion of the process electricity needs. Some steam is extracted from the turbine to provide all of the process steam needs of the mill (Larson, 2003). However, black liquor gasification is an alternative technology that has the potential to deliver double the amount of electrical energy for the pulp mill (Raberg, 2007).

Gasification of black liquor is an alternative recovery technology that has gone through a step-wise development since its early predecessor was developed in the 1960s. The currently most commercially advanced BLG technology is the Chemrec technology, which is based on entrained-flow gasification of the black liquor at temperatures above the melting point of the inorganic chemicals. In a BLG system the recovery boiler is replaced with a gasification plant. The evaporated black liquor is gasified in a pressurised reactor under reducing conditions. The generated gas is separated from the inorganic smelt and ash. The gas and smelt are cooled and separated in the quench zone below the gasifier. The smelt falls into the quench bath where it dissolves to form green liquor in a manner similar to the dissolving tank of a recovery boiler. The raw fuel gas exits the quench and is further cooled in a counter-current condenser. Water vapour in the fuel gas is condensed, and this heat release is used to generate steam. Hydrogen sulphide is removed from the cool, dry fuel gas in a pressurised absorption stage. The resulting gas is a nearly sulphur-free synthesis gas (syngas) consisting of mostly carbon monoxide, hydrogen and carbon dioxide. Most of the development of large-scale systems for BLG has been aimed at using the syngas to fire a gas turbine in which power is generated. The hot flue gas from the gas turbine is then used to generate steam in a waste heat boiler, and the generated high-pressure steam is used in a steam turbine for additional power generation. The concept is known as Black Liquor Gasification Combined Cycle (BLGCC). (IEA bioenergy,2007).

The Chemrec technology has been implemented in a development plant in Sweden in 2005. This Chemrec DP-1 plant is designed for Black Liquor Gasification under 30 bars pressure and operates at 975-1050 °C. Since the startup in May 2006, it has operated for over 1100 hours and has produced green liquor of excellent quality. The plant has also achieved complete carbon conversion and it has produced good quality syngas (Raberg, 2007).

Production is estimated by the sum of the production of bleached and unbleached sulphate in the paper and pulp industry. According to the IEA, the pulp and paper industry currently processes about 170 million tonnes of black liquor (measured as dry solids) per year worldwide, with a total energy content of about 2EJ, making black liquor a very significant biomass source. In comparison with other potential biomass sources for chemicals production, black liquor has the great advantage that it is already partially processed and exists in a pumpable, liquid form. Using black liquor as a raw material for liquid or gaseous biofuel production in a biorefinery would have the following advantages: 1) Biomass logistics are extremely simplified as the raw material for fuel production is handled within the boundaries of the pulp and paper plant. 2) The process is easily pressurised, which enhances fuel production efficiency. 3) Due to the processing of wood to pulp, the produced syngas has a low methane content, which optimises fuel yield. 4) Pulp mill economics become less sensitive to pulp prices when diversified with another product. 5) Gasification capital cost is shared between recovery of inorganic chemicals, steam production, and syngas production (IEA bioenergy, 2007).==Contribution of the technology to economic development (including energy market support)== BLGCC could have important economic development benefits, stemming from the enhancement of the competitiveness of the pulp & paper industry. The BLGCC financial analysis illustrated the potential for attractive financial returns and significantly increased cash flows relative to Tomlinson technology. The benefits include preserving and growing employment in the industry and potentially adding to rural and semi-rural employment by creating increased demand for raw materials for paper production, and in the longer term, energy and other products derived from biomass. Obviously, these benefits will be most strongly felt in regions with a concentration of pulp & paper industry activity. However, if BLGCC helps serve as a catalyst for a new bioenergy industry, the national economic impacts could be more substantial and widespread (Larson et al., 2003).

Aside from efficiency benefits, a distinctive and intrinsic feature of BLGCC technology is the expected low relative emissions of most pollutants compared to a modern Tomlinson system employing sophisticated pollution controls. Per unit of black liquor processed, BLGCC systems would provide considerable improvements in air emissions, some improvements in water pollution, and a similar solid waste emissions profile as Tomlinson technology. When environmental emissions are considered on a per-unit-of-electricity-generated basis, BLGCC systems would exhibit improved environmental characteristics across the board relative to Tomlinson technology. Moreover, if the difference in the power generated between a BLGCC system and the Tomlinson system is assumed to displace power generation on the grid, there would be additional reductions in environmental impacts associated with the displaced grid emissions (Larson et al., 2003).

Currently (July 2010) one CDM project in Brazil is registered based around the increased use of black liquor. However, this project does not utilise black liqour gasification. Instead, the project improves the recovery boiler in order to be able to fuel it (almost) exclusively with black liquor. This removes the need for additional fuels such as fossil fuels.

Black liquor is an organic by product of pulp and paper production and is regarded as a renewable fuel source. Therefore, in the case of the substitution of black liquor for fossil fuels GHG emissions are prevented (black liquor is considered carbon neutral). In this case the methodology 'thermal energy for user - version 17' can be used to calculate emission reductions. This methodology helps to determine the emissions prevented by the fuel switch.

General information about how to apply CDM methodologies for GHG accounting, as well as how to calculate GHG emission reductions from transportation or industrial use projects, can be found at: Approved Baseline and Monitoring Methodologies for Large Scale CDM Project Activities

Next to economic benefits for the mill itself, Larsson et al., also calculated that the U.S. national benefits for wide scale implementation of the BLGCC technology would be the following: 1) higher pulp yields, reducing pulpwood requirements by approximately 7 % per unit, 2) up to $6.5 billion (constant 2002 dollars) in cumulative energy cost savings over 25 years, 3) Additional potential cumulative (over 25 years) emission credit values in the range of $450 million for SO2, $3.2 billion for NOx and $3.1 billion for CO2, 4) job preservation and growth in the pulp and paper industry.