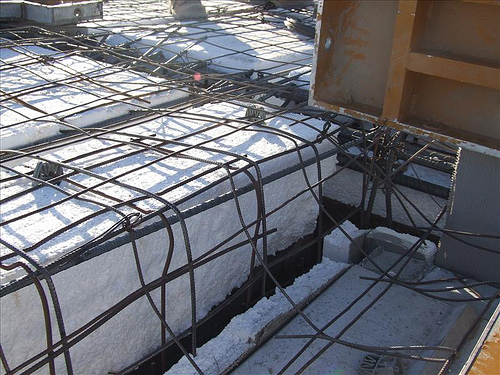 By insulating a house, one can reduce the heat loss in buildings in cold weather or climate, and reduce a heat surplus in warmer weather or climate. Thus, insulation limits the need for heating or cooling the house. Heat losses or heat surpluses arise because of differences between the indoor and outdoor air temperature. Naturally, heat flows from a warmer to a cooler space, and the temperatures will converge to an equilibrium temperature, a physical phenomenon based on mechanisms like transmission (the heat flow through materials) and ventilation (heat flow by air). Insulation aims at reducing the speed of this convergence of temperature in order to decrease the need for heating or cooling.

Floors are usually made of wood or concrete, each requiring specific insulation measures. Another option to reduce heat losses to the ground is soil insulation, for example by placing insulation material on the soil in a so-called “crawl space” (a very low basement).

The age of a building is an important factor determining the type of insulation and the way in which it is installed, e.g. if insulation is put on the outside or inside of the construction.

Windows and exterior doors have a large impact on the heating and cooling requirements of a building. New materials, coatings, and designs have led to significantly improved energy efficiency of new, high-performing windows and doors. New high-quality windows may be up to six times more energy efficient than lower-quality, older windows (Pew Centre, 2009). Some of the latest developments concerning improved windows include multiple glazing, the use of two or more panes of glass or other films for insulation, and low-emissivity coatings reducing the flow of infrared energy from the building to the environment (Pew Centre, 2009). Attention needs to be paid not only to the window itself, but also to the window frame, which can significantly impact a window’s insulation level.

Another insulation measure that reduces the amount of heat loss is sealing cracks in the ‘shell’ of the building. Cracks cause infiltration of cold air from outside or leakage of warm air to the outside. Strips or other material can be used to seal cracks in moving parts, such as windows and doors, and in places where different construction parts are attached to each other.

Increasing insulation is technically feasible for almost all buildings, although it is most efficient to add insulation during the construction phase. Because of the diversity of insulation measures, a suitable option is generally available for almost every building, since most buildings have room for improvement with respect to insulation. Next to technical requirements, human preferences regarding comfort and aesthetics also play a role, e.g. for windows better insulation comes with lower insolation, i.e. less light.

In practice, the suitability of insulation measures depends largely on the current technical state of a dwelling. Specifically the insulation already in place limits additional insulation. This is due to the physical space left for insulation and the suitability of the existing construction (e.g. availability of a cavity wall or sufficient cavity width, enough frame space to install better insulated but usually thicker windows, enough crawl space under the floor), but also because the law of diminishing returns applies: Every additional layer of insulation yields less energy savings than the previous one.

Table 1: Typical insulation values for wall, roof, floor and window (glass and frame) insulation in Dutch buildings according to their age

Insulation measures against heat loss are common practice in countries with frequent cold weather, where they are applied at the construction of new buildings, but also during the renovation of buildings. Older buildings commonly have a much lower level of insulation than newer ones, which in OECD countries are typically built according to the latest energy performance regulations. A large technical potential remains to improve insulation levels of the existing building stock using mature technologies. Many insulation measures would also be cost-effective due to savings in energy costs.

In the US, for example, more than 60% of single-family, residential houses are estimated to be “under-insulated”, i.e. by improving the level of insulation home owners could save costs, avoid GHG emissions, and improve indoor climate (Pew Centre, 2009).

Common barriers why these measures are not implemented include: high initial investment costs, lack of financing options for the up-front investments, the time and effort required to undertake renovation measures in existing buildings, relatively long payback times for some measures, lacking knowledge and awareness, and split incentives, i.e. the decision makers who can / must decide on the level of insulation in a building and pay for the higher upfront costs are not the same persons who will reap the benefits of lower energy costs for heating and/or cooling.

Governments in different regions of the world have introduced measures to reduce these barriers, including mandatory energy efficiency standards, building certification, voluntary labelling, and financial incentives to stimulate investments into increased insulation and other energy saving measures in buildings. Moreover governments, civil society and industry organisations use information campaigns to increase awareness and knowledge of energy saving options in buildings. In the EU the Energy Performance of Buildings Directive (EPBD) is the main regulatory framework to prescribe the use of energy labels for European buildings. In other regions such as the United States and some Asian countries, there is a stronger focus on a combination of mandatory regulation (such as the Energy Conversation Building Code for commercial buildings in India) and voluntary labels (e.g. the US Energy Star Qualified Homes rating system) (Levine et al., 2007).

Insulation leads to energy savings, which reduce the demand for fossil fuels and associated GHG emissions and other environmental impacts. It is estimated that improvements in the level of insulation of the existing building stock can reduce heating requirements by a factor of two to four (Levine et al., 2007). New houses built according to the latest available technology and design in various cold-climate countries use as little as 10% of the energy for heating than houses built according to the local national building codes (Levine et al., 2007).

For countries with milder winters, where heating is still required, as is the case in many developing countries, modest levels of insulation at a reasonable cost may already reduce the heating requirements by more than half of current levels, and in addition may contribute to reducing indoor temperatures in summer (Levine et al., 2007). If there is no air conditioning, lower temperatures in summer improve indoor comfort, or, if air conditioning is used, lead to additional energy savings.

The investment costs of insulating a building and the associated savings in energy costs play an important role in decisions on the level of insulation in a building.

However, frequently homeowners are not aware of the economic benefits of insulation measures.

The CDM methodology AMS-II.E.: Energy efficiency and fuel switching measures for buildings opens the possibility to include projects which improve the insulation of buildings under the CDM. As of January 2011, there are 4 projects using this methodology in the CDM pipeline, one of which has been registered and CERs have been issued.