Internationalization of the Brazilian hydrogen energy research and development network

Fuel cells are used to produce electricity and are more advanced and energy-efficient technologies than combustion engines, which burn the fuel. Fuel cells operate according to the principle of electrochemical reactions and therefore they function completely different than combustion engines. Figure 1 shows the basic principle of the electrochemical reaction. 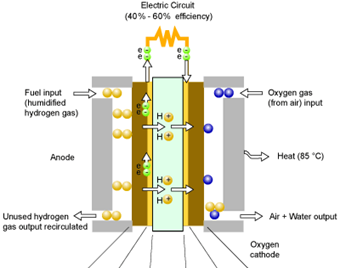 Figure 1: Electrochemical reaction in a fuel cell (National Institute of Standards and Technology)

In a fuel cell, the fuel, either hydrogen, an organic gas such as methane or natural gas or an alcohol such as methanol, is introduced into a chamber with an electrode, the anode. The anode is connected to another electrode, the cathode, with which it forms a closed electric circuit. An air stream supplying oxygen required for the electrochemical reaction is introduced into a second chamber where the cathode is installed. In the anode, the fuel is decompoed into a positively charged ion of the fuel and a negatively charged electron by an oxidation process. The ion, for example H+, migrates to the cathode chamber through a solid matrix called electrolyte. The electron runs through the circuit from the anode to the cathode. In the cathode, the ions combine with the electrons again and react with the oxygen stream to create water (when hydrogen is used as fuel) or carbon dioxide (when an organic gas is used as fuel). Electricity is generated by the migration of electrons through the electric circuit.

In a vehicle powered by Proton Exchange Membrane fuel cell (PEMFC) technology, an electric engine substitutes the traditional combustion engine. The fuel cells generate the necessary electricity on board. In portable applications, such as laptops, Direct Methanol fuel cells (DMFC) provide the required electricity and avoid the need to plug the appliance to the electricity network for recharging. Direct Methanol fuel cells are a subcategory of PEMFC technology using a different catalyst to oxidize the methanol.

A key feature of the PEM fuel cell is its electrolyte, an organic polymer that is formed into a solid membrane. The organic polymer is mostly based on perfluorocarbon sulfonate, with Nafion being the most common material for the membrane. Nafion is produced by DuPont and has been used in PEM fuel cells for 40 years (Schoots et al. 2010).

The main bottleneck for a widespread application of fuel cells are the high costs of the technology.

Infrastructure availability is another important prerequisite for the use of PEM fuel cells in transport applications. PEM fuel cells require high purity hydrogen which is not available everywhere. High purity hydrogen can be produced directly by electrolysis, but at relatively high costs. Traditional processes for hydrogen production such as steam methane reforming (SMR) need to be complemented with a purification step in order to produce the required level of purity. Delivering hydrogen to petrol stations would require a network of pipelines, which does not yet exist, although hydrogen is already transported in pipelines for industrial applications. Alternatively, hydrogen cylinders could be transported by trucks, or petrol stations could have small on-site hydrogen production and storage facilities.

For portable applications, liquid methanol can be transported or sold to end-users in small bottles. In that case, the fuel cell requires only a small recipient to store a certain amount of alcohol. Current R&D efforts for Direct Methanol fuel cells focus on cost reductions and on making the DMFC system small and light enough for portable devices. Moreover, current R&D aims to improve the energy efficiency of DMFCs, which is far below the efficiency of hydrogen fuelled PEMFCs.

Figure 2 shows the cumulative installed capacity of PEMFCs by application in 2006. Although some stationary applications exist for this technology, most PEM fuel cells are used to provide electricity to portable items and different types of vehicles. 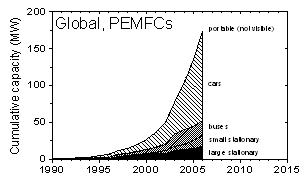 Several car manufacturers were planning the deployment of PEMFC vehicle fleets (see Figure 3). However, as electric and hybrids vehicles have been receiving more attention in the last couple of years, it is possible that some of the PEMFC plans announced by car manufacturers have been postponed.

The deployment of DMFCs is growing slowly because of the high costs of the technology. The number of units installed, however, has still been growing in the last couple of years (see figure 4).

PEM fuel cell systems are more efficient than internal combustion engines. The overall CO2 balance, however, depends mostly on how the required hydrogen is produced.

An important benefit of using PEM fuel cells in transport applications would be the fact that fuel cell powered vehicles do not emit any local air pollutants, such as NOx, CO or particulate matter. This would improve local air quality, especially in cities. PEMFCs also do not emit significant noise during operation.

For portable applications, DMFC could become an alternative for lithium batteries or alkaline batteries. Methanol is a simple alcohol that can be produced by simple processes. However, it needs to be handled with care as it is highly toxic.

Investment costs per kW for PEMFC and DMFC systems are higher than for other types of fuel cells (see figure 5). 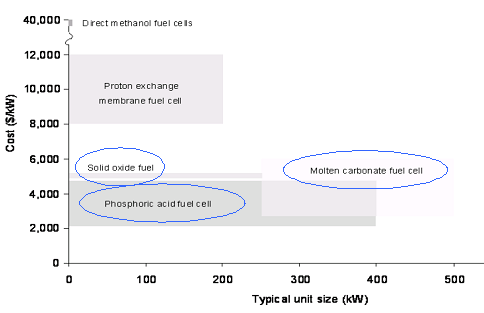 One of the reasons is the expensive materials used in PEMFC and DMFC systems such as platinum and ruthenium. Moreover, transport applications and portable items require small systems, hence the fuel cell systems needs to be miniaturized. The latter leads to higher costs for the tubes, compressors, controllers, etc. which are used to connect the system with the fuel supply and exhaust gas tubes (Schoots et al. 2010).

The cost of fuel cell systems must be further reduced before fuel cells become competitive with conventional technologies. An automotive internal combustion engine costs about $25–$35/kW. Therefore a fuel cell system needs to cost no more than $30/kW to be fully competitive (US DOE, 2008).