Fertiliser and manure management in rice fields are important methane mitigation technologies. The fertiliser management mitigation option includes changes in: fertiliser types; fertiliser nutrient ratios; the rates and timing of applications; and use of nitrification inhibitors to reduce methane emissions by affecting methanogenesis in rice fields. Rice cultivation is responsible for 10% of GHG emissions from agriculture. In developing countries, the share of rice in GHG emissions from agriculture is even higher, e.g., it was 16% in 1994.

The use of the nitrification inhibitors such as Nimin or placement of urea super-granule in flooded rice fields can be considered as suitable options for mitigation of methane emissions from rice fields without affecting grain yields where flood waters are deep (30cm) but not shallow (5cm); see figure 1 and 2. These measures not only improve N-use efficiency in lowland rice cultivation but also reduce methane emissions from deep-flooded rice fields.

Generally the depth of flood water under low land conditions in India, Bangladesh, and China is close to 30cm. Under rain-fed lowland conditions, where the depth of flood water remained 30 ± 10cm, prilled urea and nitrification inhibitor, Nimin (Neem triterpenes) 1:100 ratio (nitrification inhibitor: urea (w/w)) were applied at an uniform rate of 60kg N/ha (Rath et al., 1999). The prilled urea or the mixture of prilled urea and Nimin was broadcast to the pre-flooded field plants just before transplanting, as practiced by most farmers in rain-fed lowland rice. Urea granules (about 1gm/granule) were placed manually between the rows of rice plants at less than 5cm depth in reduced soil zones just before transplanting.

Several benzene-ring compounds (Patel et al., 1991) and N-containing compounds (Bollag and Czlonkowski, 1973) are also known to suppress methanogenesis in pure cultures and in soils. Chemicals known to inhibit CH4 production as well as CH4 oxidation include: DDT (2, 2-dichlorodiphenyltrichloroethane) (McBride and Wolfe 1971) and the nitrification inhibitor, acetylene (Sprott et al., 1982). Availability of these specific and general inhibitors of microorganisms holds promise for their use with chemical fertilisers or other agrochemicals to mitigate CH4 emissions from rice soils.

This opens up the possibilities of developing suitable management schedules for regulating methane emissions from flooded rice paddies.

The mineral N fertilisers generally reduce NH4 emissions to varying degrees. In contrast, incorporation of organic sources, for instance green manure and rice straw, in soils can stimulate methane emission (Denier van der Gon and Neue, 1995). However, when compared to burning of the straw, incorporation of rice straw before a wheat crop in Haryana (India) or vegetable crops in the Philippines and China has resulted in significant reductions of methane emissions (Wassmann and Pathak, 2007). Average methane emissions were reduced by approximately 0.4 t CE ha-1 compared to straw burning. However, the cost of field operations and the detrimental effects on upland crops make this option costly. Two other options of straw management are: sequestration of straw in the form of construction material and feeding raw straw to animals. These options are being used in China, where high rice production results in a large amounts of rice straw. The prices in China are US$5.98 and US$6.86 per t CE, which is only half of the price in the Philippines and Haryana (India). However, in all these three cases, straw management options have a relatively high reduction potential that collectively accounts for 1.34, 1.87 and 1.36 t CE ha-1 in the Philippines, India, and China, respectively. Another option is composting the straw before application, which can reduce CH4 emissions under continuous flooding by 58% compared to fresh straw under continuous flooding with no significant effect on yield (Wassmann et al., 2000).

Farmers would need to be educated about the proper types and amounts of fertiliser and manure to apply which would vary with location and cropping systems. Greater knowledge about the cost versus effectiveness of nitrification inhibitors compared to other mitigation options are needed for the many possible conditions, and then educating growers about their use is needed.

Pathak et al. (2011) have presented annual cost, returns and wheat equivalent yield in the recommended N, P and K (NPK) as well as recommended N, P and K plus farmyard manure (NPK+FYM) in various long-term experiments carried out in different states of India using different cropping systems (figure 3). Their calculations show, for example, that the rice-wheat rotation in Haryana is far more productive and profitable than the other rotations, which would increase C sequestration at the same time. The addition of farmyard manure increased productivity in two-thirds of the cases, but decreased it in about one-third of the cases, so local adjustments would have to be made for the crop rotation in use. 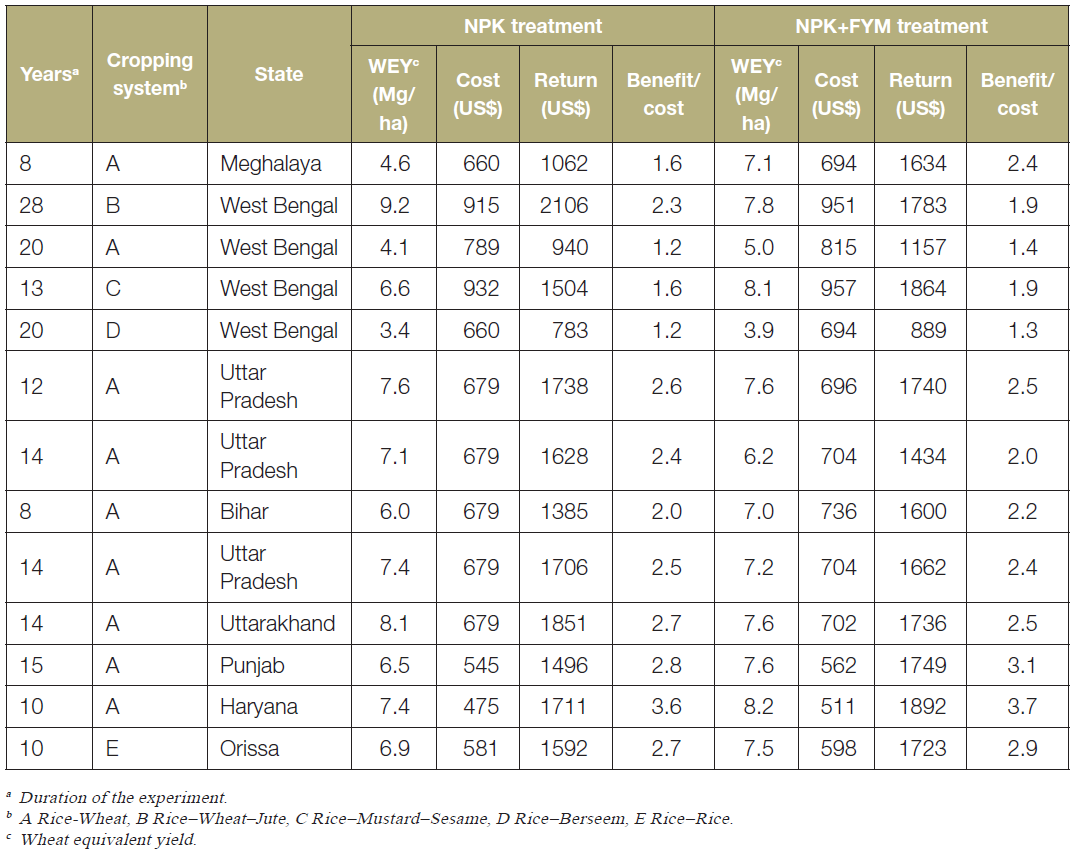 Setyanto et al., (1997) reported that methane emissions from mineral fertilisers such as tablet urea, prilled urea, (NH4)2SO4 were affected by the method of application, i.e., those methods that involved incorporation of the fertiliser into the soil had lower methane emissions. The use of ammonium sulfate as N-fertiliser to replace urea also resulted in a 5-25% decrease in CH4 emissions.

As per Wassmann and Pathak (2007), the relative costs for mitigation through nitrification inhibitor were US$6.4, US$5.5 and US$9.8 per t CO2e saved in Ilocos Norte province (Philippines), Zhejiang province (China), and Haryana state (India) respectively. In Ilocos Norte and Zhejiang the reduction potential was ca. 0.7t CO2e/ha whereas this option only yields marginal emission savings (0.13t CO2e/ha) in Haryana.

If incentives are given in terms of C credits for mitigating global warming potential and subsidies for reducing N loss, farmers will adopt these technologies such as conservation tillage, soil test based N use, and more precise placement of fertilisers on a large scale in South Asia (Ladha et al., 2009).

Cost indications are given in figure 3 above.