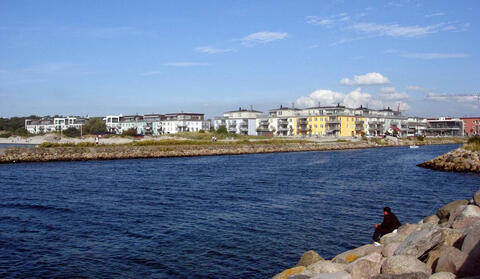 In the early years of the new millennium, the municipality of Lomma with a population of some 20,000 people, embarked on a major project to expand and renew the central area around the small harbour and beach. The goal was to expand the population by 30 per cent, and at the same time remodel the central part of the municipality so that it would become more attractive to residents. In order to achieve the high environmental standards that were aspired to by all the political parties, a process was initiated based on close cooperation with the real estate companies that were going to participate in the development. A number of other partners were also included in the project, such as universities and architects. A set of guidelines high-lighting five key areas were drawn up, which included reduced climate impact, the development of green environments, healthy in-door environments, energy efficiency, and the goal of creating lively neighbourhoods with activity throughout the day.

The project was set to continue for fifteen years and it was not deemed possible to set fixed environmental goals that would remain relevant. Instead the development has been driven in close cooperation with real estate companies that have described how they plan to meet the ambitious guidelines. These descriptions have formed the basis of a dialogue between the project partners and the real estate companies, the municipality, and the other project participants.

Now, as the project has made progress for a decade, a large share has been completed and the goals have been achieved or even exceeded with an improved living environment as a key result.