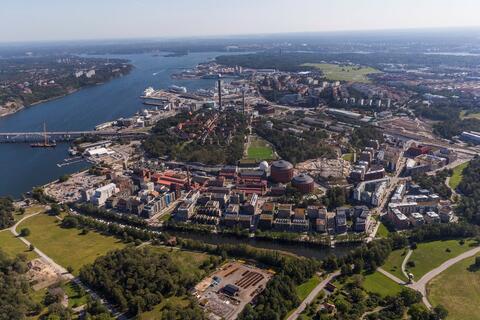 Stockholm Royal Seaport has developed an integrated stormwater system that purifies and delays storm- and meltwater before it is released into the sea. The system connects green roofs and rooftop gardens with ponds, open storm drain water and surface water drain and urban greenery. Stockholm Royal Seaport is the largest urban development area in Sweden, spanning over 236 hectares and with plans for at least 12,000 new homes and 35,000 workplaces. The area is being developed into an attractive, resource-effective and fossil-free neighborhood, with a vision to be an international role model for sustainable urbanization. The area will be adapted to future high seawater levels, to more intensive rains and risks of flooding, as well as offer attractive outdoor environments during warm and dry periods in order to enhance its resilience.

<b>Stormwater strategy </b>
The stormwater system in the Royal Seaport consists of an integrated system with green roofs and rooftop gardens, which are interacting with water flows in courtyards, streets, grass lawns, rain gardens, ponds and stormwater sewers. The greenery in courtyards, walls and on roofs enhance the surrounding park ecosystems and contribute to a robust ecosystem. Urban greenery, stormwater ponds, urban wetlands and moisture streaks delays and purifies the stormwater which eventually is released in waters Husarviken or Värtan.

The objective of the system is to create a robust system to combat flooding, purify stormwater and be a resource for irrigation and other ecosystem services. The elevation in the area is designed so that the water will be able to flow above ground when the system is overloaded. The local elevation is designed so that the stormwater primarily will be led to plant beds for delay and purification. The target is that at least 75% of the stormwater in the streets and squares leads to plant beds.

Public grounds are designed with local infiltration in plant beds to enable satisfactory stormwater management. The plant beds have a size and storage capacity that makes it possible to endure a long time of drought without irrigation and to resist high water flows at intensive rains.