Remediation project: Turning a polluted area to a toxin-free environment

Remediation project: Turning a polluted area to a toxin-free environment 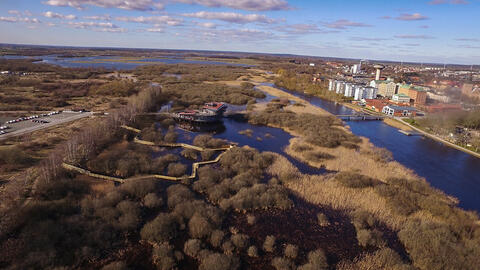 In Kristianstad, Sweden, the area of a former dry-cleaning site was once one of the most polluted areas in the south of Sweden. As a part of the Swedish objective of reaching a Toxin-free Environment, toxins have now been reduced by 99,9 % in the area. The number of substances that do not belong in the environment are a problem to animals, nature and humans and need to be reduced. At the same time, rapid urbanization can cause a shortage of housing. Through post treatment of contaminated soil, hazards to human health can be minimized and development can take place, while opportunities for the building of new residential areas can be made possible. Contaminated areas are therefore both investigated and remediated under the coordination of the Swedish Environment Protection Agency.

Former industrial sites from textile, wood impregnation, mining, chemical good, automotive, the pulp and paper industry and glassworks, have caused toxic substances in soil and water in Sweden. According to the environmental quality objective "Toxin-free Environment” that has been adopted by the Swedish Parliament, contaminated areas should be remedied to such an extent that they do not pose a threat to human health or the environment. According to this goal, all sites with very large or large risk to human health and environment (contaminated hazard-class 1 and 2) will be remediated by the year 2050.

<b> Bomgatan in Kristianstad </b>

The dry-cleaning site in Kristianstad has been classified as a contaminated hazard-class 1 area and received national funding. Another legally binding aspect for remediation in Kristianstad is “The Swedish Environmental Code” where it is stated that the operator, who is presently operating or previously operated a site which is polluted to the extent of posing risk to humans or the environment is liable for investigation and remediation. This principle called “Polluter Pays Principle”. All remediation in Sweden is based on this principle. In some cases, the landowner can be held responsible for the remediation costs. In many cases it is not possible to find someone, a person or a company, that can be held liable. National funding can then be applied. National funding financed remediation in 57 sites in 2017.

<b> From contamination to housing </b>

Contaminated areas are also remediated when the land is developed for housing and the development of the land can sometimes pay for the remediation. The remediation process involves removing the health or environmental threat the contamination causes, which most often means that the polluted soil is excavated and safely deposited as a landfill. Finding alternative innovative methods comparing to landfills that are more environmentally and cost-effective is therefore urgent. Kristianstad dry-cleaning site was one of the sites that were using such a method.

The area at Bomgatan was one of the most contaminated areas in region Skåne (south of Sweden) and the risk for spreading very toxic solvent PCE to the groundwater was huge. The thermal treatment technic evaporated approximately 1500 kg of PCE from the soil, 20 m deep, that has been caught in active carbon filters and destroyed. The thermal treatment technic ended in April 2018. With this method, 99 % of the contamination could be remediated. This opened opportunities to use this land for building a new, sustainable residential area.

When it comes to choosing the best available technic in the area, it is common to first to do a pilot-study and then evaluate. For Bomgatan, the situation was different. Thanks to the successful reference case and continuously external analysis and monitoring, such a pilot-project was not necessary for Bomgatan.

The success factor of the project was the time and resources used for the risk assessment once it was decided that the combined thermal treatment. Surface- and groundwater in Sweden is relatively unharmed from toxic chemicals. Internationally, this is somewhat unusual, and one of our great assets. But environmental toxins from contaminated areas can spread. Reducing and preventing toxic chemicals from reaching these waters is, therefore, an important reason for post-treatment of contaminated areas, especially since unused water resources today may become a source for drinking water in the future. The Bomgatan project has successfully prevented such contamination.

Many governmental parties are involved in the remediation process in Sweden, at different levels and with different responsibilities. To sum up, The SEPA is the coordinating governmental authority assigned to assess, prioritize and monitor all such efforts on a national level. The municipality Kristianstad acts as a responsible part of public-funded sites, County Administration Board in Skåne acts as controlling authority on supervision sites and distribution of grants in their region. Swedish Geological Survey acts as the responsible party on publicly-funded sites where the municipality cannot, whereas Swedish Geological Institute is responsible for support on technical questions to the county administrative boards and municipality. Other organizations are contributing to work on contaminated areas as well – including governmental authorities, private operators, and higher education institutes. “Renare mark” (Eng: the Clean Soil Network) is a non-profit network of organizations including consultants, researchers, government authorities, and entrepreneurs who coordinate exchanging information and experiences.