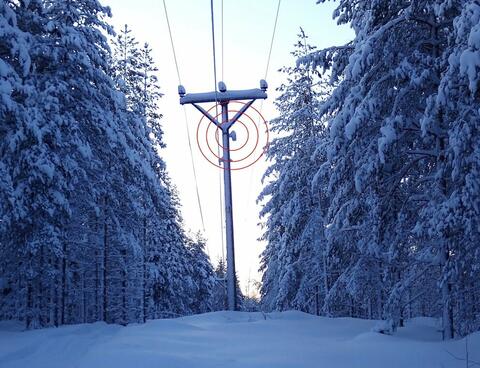 Smart sensors, redundant radio communication, AI-based decision support and advanced data analysis makes it possible to detect and position faults in the electricity grid immediately. In 2018, Exeri's system was put into operation in the electricity grid around Malå, Sweden. Skellefteå Kraft installed the system for monitoring an approximately 40 kilometer long section and after the positive evaluation of the installation, the company now chooses to proceed with installation of monitoring and sensors on a large part of the electric grid. Swedens 4th biggest Energy company, Skellefteå Kraft, operates an extensive power grid, that covers a substantial geographical area. This means that detection and location of faults in the grid can be both complicated and time-consuming. In order to reduce the resources that are needed for fault detection, Skellefteå Kraft has opted to install the system Smart Grid Surveillance from Exeri. This system monitors the grid in real time, and automatically takes action when there is a deviation.

The Smart Grid Surveillance system uses sensors, so called intelligent agents, that continuously measure the magnetic and electrical fields in the power lines. These sensors are mounted on the power line poles and can be installed when the grid is online.

Data from the sensors is collected continuously, and sent to a collecting unit, that uses artificial intelligence algorithms to analyze the data and get a complete picture of the grid and its operation. The AI algorithms keeps track of the grid’s status and can detect faults as well as indications of possible future faults. As faults propagate through the grid, different agents will detect the fault at different times, which allows for the system to detect the fault with a high degree of precision. Depending on the needs of the grid owner, the system can be used with intelligent agents either at every power line pole or at critical locations in the network only. There can also be different densities of intelligent agents at different points in the same grid.

Included in the system is also a management system, that allows for the system operator to monitor the system both in the control center and in the field.

As faults are detected with a higher degree of precision both regarding the type of fault and the location, the Smart Grids Surveillance system decreases the grid downtime. Thanks to the system, Skellefteå kraft has been able to take action in a more efficient manner by pinpointing faults and cutting in both on time needed for fault detection and for travel.

Skellefteå kraft has also seen benefits in safety, as the type of the fault is known. This makes it easier to take proper action and make appropriate safety arrangements for that type of fault.

Finally, the ability to predict faults and handle them before they actually occur, makes it possible to plan maintenance and grid investments in a better way. The improved knowledge about the health status of the entire grid, enables the grid operator to make decisions regarding maintenance plans based on actual data.

The system is highly scalable. The power grid owner decides how widespread system to install. Areas can be added successively.

As the sensors collect data by measuring electric and magnetic fields, they can be installed at lines that are up and running. This means that the system itself is interoperable with any line.

The system’s main feature is to reduce downtime for its customers, as well as making work for the grid operator more efficient. Based on this, the investment is calculated to repay itself within a short span of time.

The international potential is good, as the system works together with present installations. The system is installed in a facility in Malå in Northern Sweden. Please contact us if you are interested in visiting the site!