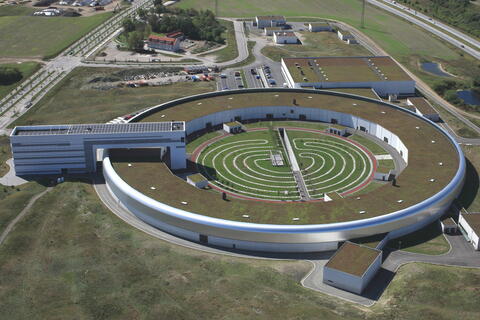 The MAX IV Laboratory is a high-performance synchrotron laboratory which has been built with high ambitions to be energy efficient and mostly use energy from renewable resources. It recycles the excess heat via the district heating system in Lund and in return receives cooling water for the accelerator equipment. The facility was the first building to receive the classification BREEAM-SE. Around MAX IV, a new city district is emerging in northern Lund. When fully built, a total of 50,000 people are expected to live and work in the area, which will also include the ESS research facility and Science Village. It will have a significant impact on the city, which today have ~125,000 citizens.

<b>High environmental standard</b>
MAX IV has been classified as a Green Building, Miljöbyggnad Guld and BREEAM Outstanding. It was the first building to receive the classification BREEAM-SE. To achieve this, the facility has LED lights in all buildings, controlled ventilation, green roofs, solutions for storing and delaying storm water and arrangements for improving the wildlife environment.

<b>Biological diversity and all excavated masses kept on site</b>
In order to make sure that the area can be reversed into agricultural use once the synchrotron is decommissioned, a cut and fill strategy was developed. All excavated masses are kept on site and have been used for making the area varied with hills and slopes. That takes away some of the vibrations in the ground that otherwise could influence the experiments.

To strengthen the biological diversity on site, a mix of seeds from the nearby nature reserve area has been sown on the slopes. Rainwater ponds including wetland vegetation has also been built. These nature-based solutions are designed for storing and delaying storm water, both for 1-year and 100-years storms.

The national laboratory’s main funder is the Swedish Research Council and it is hosted by Lund University. The property owner is Fastighets AB ML4 and the company is jointly owned by Wihlborgs and Peab.

More information about the developement of MAX IV here https://www.wihlborgs.se/en/projects/fardigstallda-projekt/lund/max-iv-…