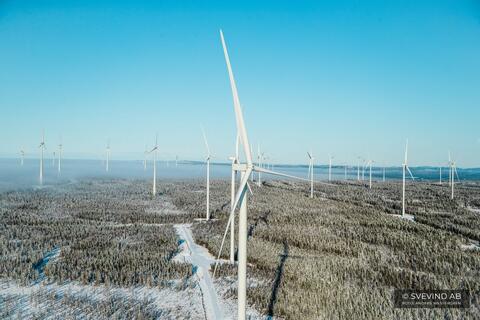 Markbygden 1101 is the largest onshore wind power project in Europe. Once completed, it will consist of up to 1101 wind turbines that together will produce up to 12 TWh per year. This is comparable with around 8% of Sweden’s electricity production. <h2>Subarctic onshore wind production</h2>
Markbygden 1101 is one of the largest wind power projects in the world. Located outside of Piteå, northern Sweden, the wind farm extends over 450 square kilometres connected by a 700 km long road network. Once completed, it will consist of up to 1101 wind turbines. The project is divided into three main phases, with several sub-projects working simultaneously with assembling the wind turbines. The electricity that the wind turbines produce is transmitted to nearby 400 kV cables and is distributed to consumers through the national grid.

The wind farm is placed on a plateau between two river valleys, a location that allows for maximum utilization of a natural phenomenon where the wind accelerates over hills. This acceleration effect is strongest during winter, which makes northern Sweden an excellent location for onshore wind turbines. The subarctic climate ensures sufficient electricity production during the colder months when the electricity consumption is at its highest.

<h2>Sustainable energy for future generations</h2>
Wind power is a renewable, sustainable, and long-term source of energy that is provided by nature. The operation of wind turbines does not produce any emissions or require any transportation of fuel. Unlike virtually all other forms of energy production, wind power does not leave any environmental debt for future generations to repay.