Älvstaden, Frihamnen - a new district in the heart of Gothenburg

Älvstaden, Frihamnen - a new district in the heart of Gothenburg 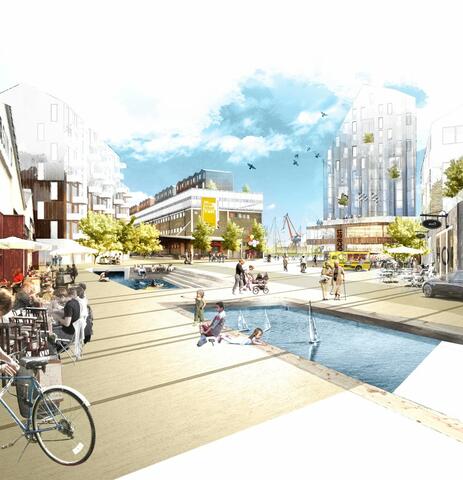 Älvstaden is the Nordic region's largest urban development project. Central Gothenburg will double in size and the sustainability ambitions of the project are high. By strengthening the core, and joining Frihamnen with the rest of the city, an inclusive, green and dynamic inner-city is created. Within the City of Gothenburg, work is underway to reduce the differences in living conditions for the inhabitants. According to the governance document for social sustainability, Program for an Equal City 2018-2026, the city's physical environments should create conditions for socio-economic integration, security and cohesion. SOCIAL INTEGRATION
One of Älvstaden’s seven sub-areas is Frihamnen, which will eventually connect the city centre across the river with the rest of Hisingen. In Frihamnen, a new model to achieve social integration through differentiated renting is tested. The model is not about public subsidies, but rather a new innovative business model. Through the model, developers are challenged to build residential units at a reasonable cost despite they are newly built. As regards the development of the first part of Frihamnen, there is an ambition that 50 % of the housing stock will be tenant owned apartments and 50 % rental apartments. And half of the rental apartments, about 900, will be low cost rentals. Two different business models are tested in order to achieve this. In the first model the rates for the rent will vary within the same property depending on the apartment location. In the second model, the tenants get a lower rent by discount. The two developers, Botrygg and Framtiden, are planning to build apartments with different levels of standard within the same building. Another developer, Magnolia, has the same design in all their apartments, but a portion of the units are rented at a discount.

PLACEMAKING
As part of the planning process Älvstranden Utveckling use so called placemaking as a strategic method. Through placemaking spaces are created in the area together with the citizens, which strengthens the sense of
belonging.

Although Frihamnen is located at the very centre of Gothenburg, it will take a long time to establish it as a new urban area, which makes placemaking especially suitable to begin with. The physical starting point is right in the middle of what will later on become the first phase of the so-called Jubilee Park. The goal is to early on use the space and create activity which will lead to, both in the short as well as the long term, Frihamnen being a place that many have relationship to. Several of the buildings and spaces that have been created through placemaking will become integrated permanent features as the project progresses over the years to come.

By allowing activity, and creating opportunities for it to happen, residents and visitors to Gothenburg can from very early on be a part of making Frihamnen the place to be. Activating the public spaces long before the buildings are in place reduces the gap between what is there today and the visions for the fully developed area. By using, and taking advantage of, the long time periods leading up to the physical construction phase, an asset is created. Some examples of activities and placemaking that has happened in Frihamnen already is a sauna, a floating outdoor pool on the river, a roller derby track, cultivation beds and a beach. All of the above is located in the area that will be turned into the Jubilee Park, and there is more to come.

THE JUBILEE PARK
“When the municipality builds a park, the inhabitants' participation and the place's condition are a natural starting point. The project shows the importance of letting more people get their voices heard when the city grows and to support the emergence of local neighborhoods. The landscape architecture becomes a motor of change that contributes to social inclusion and the emergence of local economies. The winner is an inspiring role model for citizen-driven urban development that in an innovative way explores the concept of sustainability.” (Jury's motivation for the Siena Prize 2018).