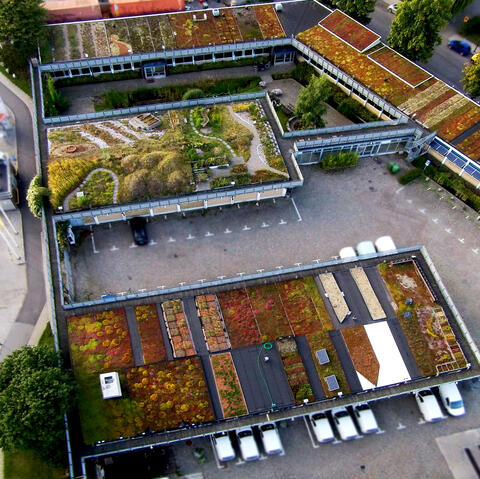 The district Augustenborg has been rebuilt during the last 20 years to manage problems with flooding and socioeconomic challenges. By planning and rebuilding through solutions based on ecosystem services, the area is now an attractive district that managed well during the flooding in 2014. Augustenborg is now an excellent example of a successful sustainable makeover of an urban district. Malmö is conducting a strategic climate adaptation work focused on managing water issues, but also on securing ecosystem services. Augustenborg is a good and well-visited example of well-functioning climate adaptation measures in a neighborhood with experiences from 20 years. Over the years, the eco-city has developed into an extensive social process, in constant change.

<b> From problematic area to eco-city </b>
The district of Augustenborg was built by Malmö Municipality’s Real Estate Company, MKB, during the years 1948-1952. In 1996, the decision was taken to create an eco-city from the housing estate and industrial area. The make-over focused on efficient water systems, green roofs, and solar energy. The water systems include surface rainwater runoff systems, canals, and ponds.

The area is about 20 hectares large with 3000 inhabitants in apartment blocks with 3-6 floors. When the area was newly built, the district had high status, but in the 1970s, the area began to decline. Unemployment rose among the residents and regular floods of basements during heavy rain caused problems. In the 1990s, the area was characterized by social, aesthetic and ecological problems and the need to make radical changes became acute.

To reverse the development and address the flood problem, the project Eco-City Augustenborg was initiated. The project was developed in a collaboration between the MKB and Malmö city, but many other actors were involved. The project aimed to raise the area’s status, solve social problems and get rid of the basement flooding by renovating the district into an environmental predecessor.

Malmö has rebuilt the district of Augustenborg into an attractive eco-city with a modern recycle thinking, green surfaces and its own production of renewable energy. The biggest change was the transition to an open stormwater system with ducts and ponds instead of pipes under the ground. The eco-city Augustenborg was formed as a collaboration between organizations, authorities, associations and companies in the area. Extensive work on changing courtyards, vegetation and common areas started with the residents’ wishes as the main focus. The project also included renovations of housing, increased waste management, social projects and more.

<b> A cost-efficient stormwater system </b>
In the Augustenborg district, an open stormwater system has been established that collects and cleans the rainwater. The system is a good example of how innovative solutions can complement existing technology in an already built area and provide several environmental benefits. The measure has reduced flooding and the load on the sewage treatment plant and has led to increased biodiversity in the outdoor environment.

The construction of the complex open stormwater system in Augustenborg is one of the first projects in which the existing housing environment has made the change to disconnect stormwater from sewage systems and make it visible at ground level. The stormwater system is primarily intended to delay and reduce the stormwater flow from the area. One objective has been to try out several new solutions within the same area to give inspiration and ideas for continued development. There are examples of gutters, canals and ponds, but also green roofs and walls. By building the open system with the water visible, the area’s immediate environment has also received a positive addition – both aesthetically and ecologically. The goal has been that 70% of all rainwater in Augustenborg should be taken care of or delayed in the new stormwater system.

The open stormwater system has proved to be a cost-effective solution, which has also led to that the flooding in the area has disappeared, the load on the combined sewage network being reduced, energy consumption in the treatment plant reduced, smaller amounts of water reaching the recipient and increased biodiversity in the area. When Malmö in 2014 was hit by major floods in connection with a downpour, the previously flood-affected district of Augustenborg managed without damage.

<b> Greenhouse Augustenborg </b>
The Greenhouse apartment building was built in 2016 with 14 floors and 56 apartments. The Greenhouse is a passive house with smart solutions that facilitate a sustainable lifestyle. The apartment building includes cultivation balconies, a common roof garden with greenhouses, green roofs, solar cells, cargo bike pool, smart laundry, simple and smart solutions for waste management, as well as separate measurement and debiting of hot water and electricity. Residents in Greenhouse have the opportunity to engage in various groups that organize social events, hold courses and take care of common areas.

<b> Botanical roof garden </b>
In Augustenborg there is also a botanical roof garden with about 10,000 square meters of green roofs. The roof vegetation both reduces and delays the stormwater and it also has an insulating effect on the building. The green roofs also constitute a positive addition to the local environment and mean that biodiversity is increasing. Augustenborg’s botanical garden is well attended by groups who want to study different Green roof facilities. The Scandinavian Green Roof organizes conferences and lectures with ecological themes and offers guided tours in Augustenborg.