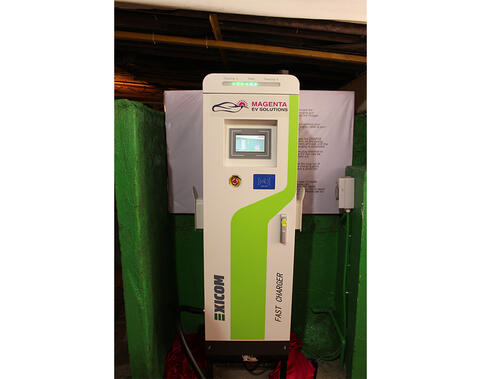 A major aspect of why a buyer is deterred from opting an electric vehicle in India is the lack of charging infrastructure, which gives way to the anxiety of running out of juice. Now though, the situation is on the trend of getting better, this charging solution integrated with solar rooftop is doing its bit to add to it. Solar panels and electric vehicles are the perfect match that is certainly going to play a key role in the energy systems of the next 25 years
The ‘Magenta Charging Station ’ will cater to electric four-wheelers and will enable EV users to charge their vehicles safely and conveniently.  The DC fast-charging station is based on Magenta's own rooftop solar installation of 15kW and the charging unit is from Exicom Tele-Systems. The grid-connected charging station is powered by solar energy, which in turn makes the entire ecosystem totally free of fossil fuel. It states that by reducing the carbon emissions to zero, it is the right solution for an eco-friendly environment. The station will primarily use solar energy to charge EVs and use the grid secondarily. The fast charger provides 15 kW supply that would take approximately 90 minutes for e2o plus to charge completely. The solar charging infrastructure is currently placed in Lifon industrial facility at Turbhe, where it is placed on a rent-free basis.  This pilot will operate on a non-commercial basis providing e-vehicle owners the opportunity to charge rapidly and for free as the business model is not ready for charging stations. At the moment, and for at least the next six months, this project will only operate on the social model rather than commercial model.

Exicom has aggressive plans in the EV space and is planning to set up 100 charging stations at various locations in Mumbai and is already in discussions with various stakeholders like Mahindra Electric, Tata Motors and Electrotherm. Considering the government's ambitious plan to go all electric by 2030, it will be encouraging the move towards electrical driven vehicles by allowing subsidies or other means. The number of EVs is currently low in India, but the scenario can greatly be improved by providing means to charge them at convenient locations.