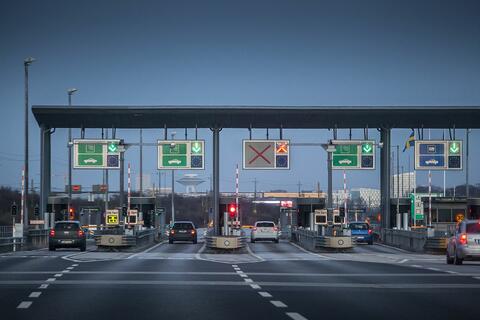 BroBizz is a Danish system for electronic toll collection. It was established in 2008 and BroBizz A/S develops and manages the concept. BroBizz A/S is 100% owned by Sund & Bælt Holding A/S.

A BroBizz is a wireless transmitter, which ensures the possibility of driving quickly through automatic tollbooths. BroBizz can be used for trips across the Great Belt Fixed Link and the Øresund Bridge, as well as for payment on several ferries and toll roads, and at airport car parks and parking facilities in numerous cities. Sund & Bælt is part of the joint venture EasyGo. Through EasyGo, BroBizz can be used for automatic payment on bridges, ferries and at other automatic toll booths in Scandinavia. Norwegian AutoPASS is also part of EasyGo, and BroBizz can be used on Norwegian toll roads with AutoPASS.

BroBizz A/S is the first company in Scandinavia registered as an  European Electronic Toll Service (EETS) issuer. The EETS directives purpose is that an electronic transmitter can be used for payment on all toll roads in the EU.