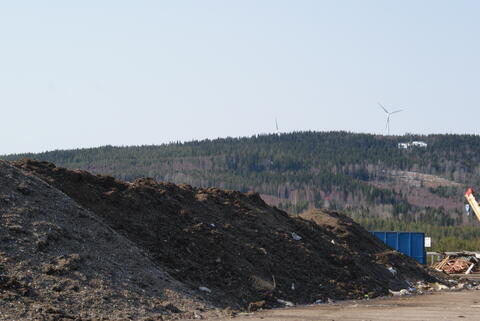 At Björnhyttans recycling center compostable soil is extracted from the household waste. How it works: Household waste is emptied in the conveyor belt and then it undergoes a homogenization process and several separation steps to separate the organic waste from the inorganic waste. Plastic bags and sealed packaging is opened with knifes in the drum. Then the waste continues into homogenization drum where it is turned and dissolved. The optimal residence time in the drum is 6- 8h. When the warm waste exit the drum it passes a powerful magnet that sorts out the metal objects and collect them in a container for disposal or recycling. After the removal of metal the waste continues to a coarse screen that removes large plastic items and other combustible materials. These items will be collected in a container for transport to the incineration plant. The material that slips through the coarse sieve moves to a smaller sieve. In the smaller sieve plastics and combustible material of smaller size is removed. The waste has after being sorted in three steps, the content of almost purely organic material. But still batteries and glass could be included. So finally a so called wind sieve is used in a final step, where volatile organic material is allowed to pass while the heavier inorganic material falls onto a belt and are collected for disposal. The lighter material that remains after the wind sieve is the ultimate raw compost. The raw compost is then aerated mechanically and end- product is used as cover material of old landfills . 40% of the household waste that enters at Bjönhyttan is sorted out as compost, Björnhyttan, 10% end up at a landfill and the rest goes off to incineration.