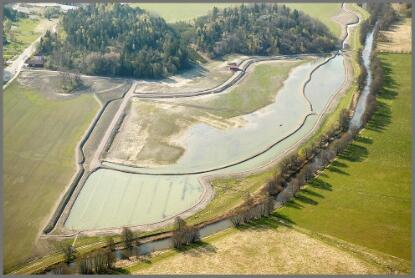 Since 2003 the waste water from the town of Trosa (about 4500 citizens) has been treated in artificial wetlands, after the basic treatment in the sewage plant. Thanks to the wetlands the Trosa river and the town bay have been spared from eutrophicating substances (plant nutrients) as well as contagious substances (pathogenes). Besides the value of purifying the water, the wetlands are a popular recreation area. The wetlands are used for education and many study visits are made here. Vagnhärad, the neighbouring town with about 4500 citizens, has a similar area of artificial wetlands since 2001.

The wetlands of Trosa have an area of about 6 hectars and the wetlands at Vagnhärad have an area of about 2 hectars. After about one week in the wetlands, the waste water has attained a very high quality, it is very clear and has bathing water quality almost the whole year. More than 50 % of the nitrogen that comes with the waste water from the households is removed when the water has been treated in the treatment plant and the wetlands. Grants from the government have made the building of the wetlands possible. There are indications that the remains of medicinal products in the waste water are taken care of in the wetlands, this is being investigated in a special project. Positive environmental effects: • Remaining amount of phosphorus after treatment: < 0,1 mg/liter, average over the year. • Reduction of nitrogen in the wetlands: about 1 ton per year. • Water treated by the wetlands mostly has a level of cleanliness that meets bathing standards.