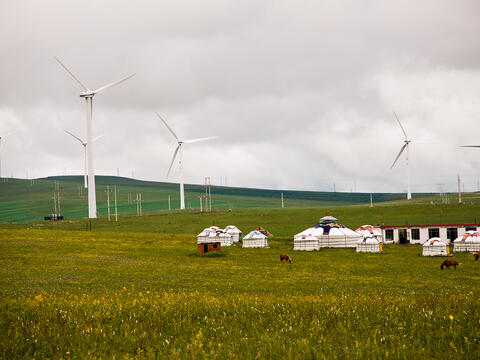 In many Asian cities, a generation of children is growing up that rarely sees blue skies. Air pollution penetrates their lungs and stings their eyes -- but they must keep breathing it in.

It is one of the most pernicious threats to health precisely because it is so pervasive. Every year, 6.5 million people die from diseases caused by indoor and outdoor air pollution, such as heart disease, stroke, respiratory diseases and lung cancer, the “noncommunicable” diseases that are the biggest health scourge of the 21st century.

More than half of these deaths occur in just two countries -- China and India -- where densely populated and highly-motorized cities, such as Beijing, are surrounded by a lingering haze of polluted air most days of the year. Diesel-fueled transport, burning trash, coal-fired power plants and dirty fuels burned in simple household cook stoves all spew harmful air pollutants into the atmosphere -- including so-called “short-lived” climate pollutants such as black carbon and methane, as well as carbon dioxide, which persists for hundreds of years.

While the high pollution levels of Asian cities have captured global attention, few people realize that the region is greening quickly. In fact, of the cities WHO monitors for air quality, some 60% of high-income Asian cities already meet strict WHO air quality guidelines for one of the most-health harmful pollutants, fine particulate matter (PM2.5). This is a larger proportion than cities in almost any other region of the world, except North America.

The challenge now is to move the low- and middle-income Asian cities to safe levels. Adopting strategies and policies that have been used in these higher-income cities, such as cleaner transit systems or pedestrian-friendly paths, can help lead the way.

Although the world gasped when the United States pulled out of the Paris Agreement, cities everywhere, including in the U.S., have rushed to make climate commitments rather than waiting for their national governments to take the lead.

Beijing, currently battling some of the world’s poorest air quality, is moving rapidly to cut air pollution. The city is adopting vehicle emission standards that are stricter than the national ones to reduce the impact of the 5.6 million vehicles already on the road. By 2020, the city plans to replace more than 70,000 gasoline and diesel taxis with electric vehicles and install 435,000 charging stations.

These efforts will not only drastically improve health, but they will also lead to economic growth and jobs and innovation in the automobile industry. Starting next year, the Chinese government will require nearly one out of 10 vehicles manufactured to be electric, and India is following suit with a plan to transition to an all-electric vehicle fleet by 2030.

China has been the single largest developer of new renewable power and heat for the past eight years. With a solar revolution taking off in India, and 48 developing countries now committed to 100% renewable energy goals, the global share of total global renewable energy capacity is certain to increase.

Asia’s rapid urbanization is often pointed to as a cause of pollution (with more people come more emissions), but it also offers an unprecedented opportunity to create sustainable, liveable and dynamic cities.

Seoul is one well aware of that fact. South Korea’s capital is rethinking how people move by adding 2,000 kilometers of bike paths, creating 250 pedestrian-only zones and increasing public transport use by 2030. A former downtown expressway has also been recently repurposed as a new urban park, taking space away from automobiles and giving it back to citizens. One million people already visited in the month since it opened.

These are a good testament of what can happen when cities take matters into their own hands. The key is that other ones are made aware of possible solutions.

This is one goal of “BreatheLife,” a global campaign led by WHO, UN Environment and the Climate and Clean Air Coalition. Not only are cities voluntarily committing to reduce air pollution in line with WHO air quality standards, but through regional gatherings, they can share information to build a deeper understanding of air pollution’s health impacts.

Let’s not waste one more breath.