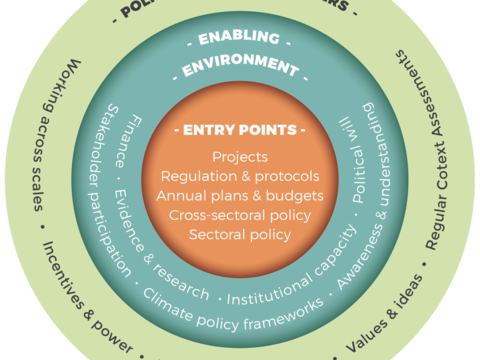 CTCN Network member Acclimatise Group informs, that developed, and launched by a group of national and international climate change experts between 2016-2018, the framework identifies barriers and opportunities for climate adaptation mainstreaming and has already helped 10 national and sub-national governments change their investment, planning and policy processes to account for climate change.

One of the authors of the framework explains:
“Adapting to climate change could cost up to US$ 500 billion per year by mid-century. A sizeable amount of money will necessarily come from government budgets, as investments are made in new infrastructure and other development. Governments, therefore have significant power to drive action on climate adaptation. To do this successfully they must integrate climate adaptation across their own programmes leveraging spending across departments to deliver climate resilience. The framework helps governments do just that.” With the help of this new framework, practitioners and policy makers will be able to understand how to mainstream adaptation within governance systems by focusing on three aspects:

1.    Entry points: Opportunities for integrating climate considerations into the planning and policy process.
2.    Enabling environment: The characteristics – people, institutions, resources etc - that help support the successful adoption of climate change adaptation policies and practices.
3.    Political economy drivers: The factors that influence and affect the enabling environment such as the interests and incentives facing different groups as well as formal and informal social, political and cultural norms.

The full learning paper “Mainstreaming adaptation to climate change within governance systems in South Asia: An analytical framework and examples from practice” and the learning brief can be accessed here.