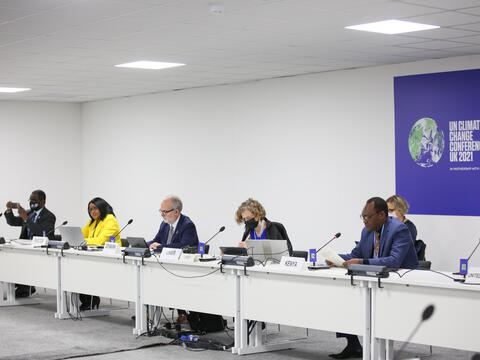 (Glasgow, 10 November 2021) – Today, Member States met at COP26 to discuss expansion of international technology collaboration to implement Article 10 of the Paris Agreement. Several nations, including Germany, Japan, the Republic of Korea, Spain, and the United States announced funding commitments to support the work of the UN Climate Technology Centre and Network (CTCN), the implementation arm of the Technology Mechanism.

The meeting, hosted by the UK COP Presidency and the Chilean and Danish governments, focused on supporting developing countries to access technologies for both low-carbon and climate-resilient development. Government representatives discussed the need to prepare the necessary policy and regulatory foundations to support widespread technology innovation and deployment in developing countries. Building the capacity of skilled workforces to install and maintain green technologies was also highlighted as a key priority.

Speaking at the meeting, the Executive Director of the UN Environment Programme (UNEP), Inger Andersen, said, “Better technologies in developing countries will be crucial to fulfilling climate change commitments. The CTCN, as the implementation arm of the Convention’s Technology Mechanism, will be central to facilitating the development and deployment of such transformative climate technologies. However, we have so far only tapped into a fraction of the CTCN’s potential. At this critical juncture for climate action, the global community can do a lot of good by strengthening the Technology Mechanism, as climate technology development and transfer offer tremendous opportunities for low-emission growth and resilient societies”.

“The European Commission has been the largest donor to the CTCN since its inception. As important negotiations take place at COP26 to act and engage in a new impetus to address the fight against climate change, solutions on technology development and transfer will be of major importance. In this context, we are keen to further support, as donors, the CTCN and the development of its activities on the ground and particular in most vulnerable regions. We also encourage further donors to contribute, including MDBs and the private sector,” stated Ms. Elina Bardram, the Head of the International policies Unit, Directorate General for Climate for the European Commission.

Mr. Toshiaki Nagata, Director of the Global Environment Partnership Office for Japan’s Ministry of Economy, Trade and Industry, stated “Japan is one of the largest donors to CTCN as an individual country. We have been making financial contributions constantly every year, and subject to budgetary approval, we intend to contribute again to the CTCN operations next year. Our support has also extended to the nomination of a member to the CTCN Advisory Board.”

Mr. Moongi Choi, Science Attaché in the Republic of Korea’s Embassy in the UK, commented that “The Republic of Korea thinks that the CTCN is an innovative platform for global climate technology cooperation where information on climate technology needs is shared, and the match-making between technology seekers and technology providers is undertaken in an efficient manner. Korea wishes to further support the CTCN in the upcoming five years ahead by contributing approximately $10 million USD for the successful operation of the CTCN Partnership and Liaison Office established in October 2021 and launched in the early 2022. In addition, Korea will support at least over 4.12 million USD in the form of the pro-bono support by 2030.”

Germany announced a voluntary contribution to the CTCN Trust Fund underlining its continuous support for the Technology Mechanism: “Germany commends the past work of the CTCN in responding to the needs of countries and making an active contribution for linking the Technology Mechanism with other processes and actors. Technology is key if we want to combine economic development and climate protection. Germany, as announced by Parliamentary State Secretary Winkelmeier-Becker last week, will provide a voluntary contribution for the CTCN Trust Fund in 2021 underlining Germany’s continuous support”.

Deputy Special Envoy for Climate Jonathan Pershing announced a pledge by the United States to renew its financial support to the CTCN and stated, “By helping to deploy technology in developing countries -- at the rapid speed and massive scale that is urgently needed -- the CTCN plays a critical role in supporting our collective ability to achieve the Paris Agreement's goals."

The government of Spain also committed to doubling its past funding to support CTCN efforts. In response to this demonstration of climate technology support by so many countries, the CTCN Director Rose Mwebaza said, “Member States have already supported the CTCN in delivering technology solutions to over 100 countries across a broad range of sectors and we stand ready to serve developing countries as they raise their climate change ambitions. By combining current solutions, traditional knowledge, and new digital technologies, we can lower global emissions and build resilient societies. This will require rapid implementation at a very large scale as well as engaging inclusive participation of governments, the private sector, and a broad range of stakeholders including women, youth, and indigenous peoples.”

Article 10 of the Paris Agreement defines the role of technology in addressing climate change and declares: “Parties share a long-term vision on the importance of fully realizing technology development and transfer in order to improve resilience to climate change and to reduce greenhouse gas emissions”. The Article also emphasizes that Parties should strengthen cooperative action on technology development and transfer and that the Technology Mechanism established under the Convention is designated to implement this Agreement across a technology framework of innovation, implementation, enabling environment and capacity-building, collaboration and stakeholder engagement, and support.

Photos from the event are available at https://www.ctc-n.org/news-media/galleries/high-level-donor-roundtable-cop26