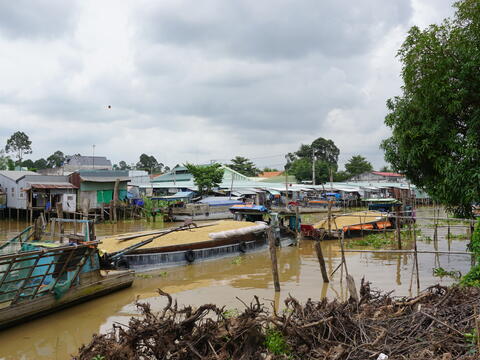 Vietnam depends on coal as its main energy source, which comes either from the north of the country or has to be imported to meet demand. Alternative, locally produced fuel sources could increase energy self-sufficiency and foster development of a local energy sector. Rice husks represent a strong potential in terms of organic material to be used as an energy source. With an estimated production of 44 million tons of paddy rice in 2013, approximately 7 million tons of rice husks are available (or to be disposed of if unutilized) in terms of potentially usable biomass.

The Vietnam Cleaner Production Center (VNCPC) asked for assistance from the Climate Technology Centre and Network (CTCN) on unfolding potential of bio-waste conversion projects with a relevant and concrete impact, and exploring options for scaling-up such work in the rice sector, as well as for thermal energy demand in other sectors. The project was implemented by SNV Netherlands Development Organisation (SNV), a Climate Technology Network member.

The recent closing workshop on this technical assistance attracted 40 representatives from rice mills, technology companies, researchers and investors. In her opening remarks, Ms. Hoang Mai Van Anh from Vietnam office of CTCN's co-host, the UN Industrial Development Organization (UNIDO), said: “The CTCN provides technical assistance in response to requests submitted by developing countries via their nationally-selected focal points, or National Designated Entities (NDEs). The aim of this technical assistance is to explore various routes of rice husk valorisation that can minimise bio-waste and improve overall economic performance of rice mills while at the same time reducing greenhouse gas (GHG) emissions”.

“The impact can be enormous when such solutions are implemented. Biochar produced from rice husk, for example, can help Vietnam to maintain or even increase agricultural yields but also protect the soil against the adverse impacts of climate change. Amorphous silica ash from rice husk on the other hand has the potential to substitute importation of silica fume, an expensive admixture used to improve the properties of concrete”, concluded Mr. Eric Buysman, technical leader at SNV.