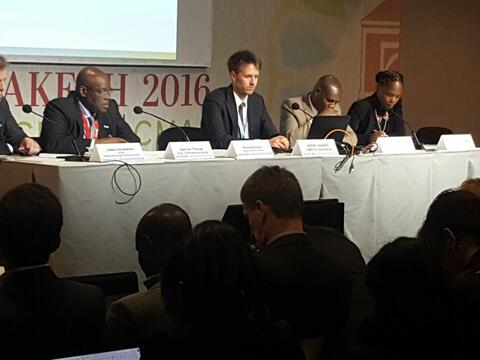 The Marrakech Climate Change Conference commenced three days after the Paris Agreement entered into force. In a press conference preceding its opening, UNFCCC Executive Secretary Patricia Espinosa said that dialogue and decisions in Marrakech have “immense potential” to “accelerate and amplify” the response to the climate challenge outlined in the Paris Agreement.

COP 21/CMP 11 President Ségolène Royal, France, described COP 22 as an “African COP” and called for climate justice for the continent. Espinosa emphasized that realizing the Paris Agreement’s goals is not a given, and stressed the need for: adaptation support and progress on the loss and damage mechanism; integration of nationally determined contributions (NDCs) into national policies and investment plans; capacity building; predictable finance to catalyze low-emission development; and full engagement of non-party stakeholders.

During the COP plenary, Salaheddine Mezouar, Minister of Foreign Affairs, Morocco, after being elected COP 22/CMP 12 President by acclamation, said the conference represented Africa’s commitment to climate action, and called for finalizing support mechanisms for the Paris Agreement. Parties then adopted the COP agenda with the agenda item on the second review of the adequacy of Convention Articles 4.2 (a) and (b) (developed countries’ mitigation) held in abeyance and Turkey’s request to include an item, on access to support from the Green Climate Fund (GCF) and the Climate Technology Centre and Network (CTCN) under the Paris Agreement by parties whose special circumstances are recognized by the COP, left pending under other matters. On the organization of work, inter alia, COP President Mezouar reported an emerging understanding on the provisional agenda for the first session of the Conference of the Parties serving as the meeting of the Parties to the Paris Agreement (CMA 1). He suggesting that the CMA could adopt, as a procedural conclusion, the continuance of its work either in 2017 or 2018.

The CMP convened briefly, but was then suspended.

During the SBSTA opening plenary, delegates adopted the agenda and addressed agenda items on, among other things: development and transfer of technologies, and the Joint annual report of the Technology Executive Committee (TEC) and the CTCN; methodological issues under the Convention, specifically bunker fuels; and modalities for the accounting of financial resources provided and mobilized through public interventions in accordance with Paris Agreement article 9.7 (transparent and consistent information on support for developing country Parties).