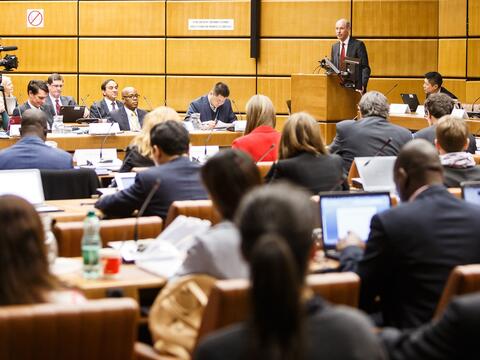 The Seventh meeting of the CTCN Advisory Board (AB7) took place from April 11-13 at the headquarters of CTCN's co-host, the UN Industrial Development Organization (UNIDO) in Vienna, Austria. The Board commended the progress that had been made since the last meeting in engaging developing country focal points, including through the inaugural Private Sector Engagement Forum, building the CTC Network to 150+ members, and in registering its 100th request for technical assistance - which was signed by CTCN Director Jukka Uosukainen on the opening day of the meeting. The Board supported the expansion of the Least Developed Country Incubator Programme to Small Island Developing States, received an update on the progress of the RD&D Task Force and its plans to align with the work being undertaken by the Technology Executive Committee, and launched two new Task Forces to address funding and finance.

The Advisory Board discussed the mandate of the CTCN in light of the outcomes of COP21, and provided guidance on the upcoming UNFCCC workshop at SB44 on linkages between the UNFCCC Financial and Technology Mechanisms. The CTC agreed to provide additional information on a number of working items, including the estimation of impacts of its technical assistance and plans for its Knowledge Management System, and that its next meeting could be informed by the inclusion of select National Designated Entities to help provide a more complete picture of CTCN operations.

The Climate Technology Centre and Network is accountable to the Conference of the Parties (COP) of the UNFCCC through the CTCN Advisory Board. The Advisory Board meets twice per year and provides direction on the CTCN’s fulfilment of the COP’s guidance. AB7 concluded by thanking outgoing Chair Matthew Kennedy (Ireland) for his service and naming Spencer Thomas (Grenada) as Chair to guide the Board through its next two meetings. The Eighth meeting of the Advisory Board will take place in Copenhagen from 23-25 August, 2016.