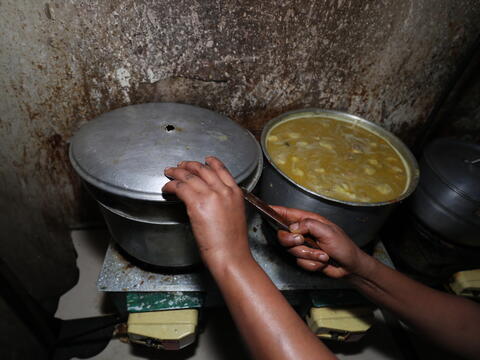 In the rural areas of Karnataka in India, like in many parts of the world, women are exposed to indoor air pollution from inefficient firewood cookstoves. Local NGO TIDE launched a clean cook stove programme in 2002 where rural women are trained as stove builders who further train other women in building and maintaining clean stoves. The initiative is supported by the Karnataka State Forest Department and the Department of Science and Technology, Government of India. Women who complete trainings are given molds to build stoves in households - an activity they engage in during 3-4 months a year as they are busy during the agricultural season.

This model has shown that providing clean household technologies that suit women's requirements and does not change their traditional habits has a higher adoption rate. It was also found that engaging women to popularize the stove was more successful than engaging men, as women are able to communicate and relate to women better. The income earned by women has given them more agency and control, and levels of confidence have increased as they now step out from their homes for attending and give trainings.

Read more about the stories like this in the publication “Women in Energy: Breaking Stereotypes and Inspiring Change”, that the Climate Technology Centre and Network (CTCN) produced together with the Energy and Resources Institute (TERI).

For more information about gender and technology, please visit here.