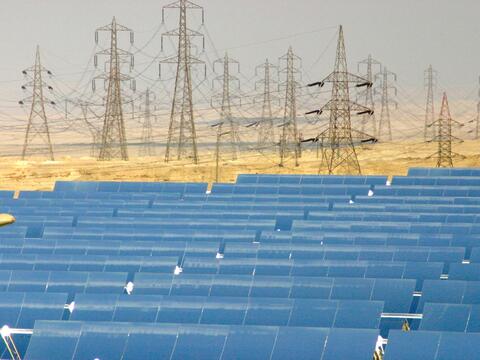 The Atlas of Africa Energy Resources compiles and synthesizes regional and national information. It provides visual information on the challenges and opportunities to providing Africa’s population with access to reliable, affordable and modern energy services. Through maps, charts and images, this Atlas combines scientifically reliable data sources to provide a complete view of Africa’s energy needs, resources and opportunities. The Atlas of Africa Energy Resources features over 64 maps and 73 satellite images as well as some 50 graphics and hundreds of compelling photos.

The Atlas of Africa Energy Resources shows both the potential and the fragility of the continent's energy resources, which are at the heart of Africa's socio-economic development.

While Africa is richly endowed with both renewable and non-renewable energy resources, its current energy production is insufficient to meet demand. About a third Africa's population still lacks access to electricity and 53 per cent of the population depends on biomass for cooking, space heating and drying.

According to the UN Environment, energy consumption on the continent is the lowest in the world, and per capita consumption has barely changed since 2000. The poorest African households spend 20 times more per unit of energy than wealthy households when connected to the grid. A kettle boiled twice by a family in the United Kingdom uses five times as much electricity as a Malian uses in a year, according to the UN Environment.

The Atlas of Africa Energy Resources was produced by the Infrastructure Consortium for Africa (ICA) in partnership with the UN Environment and the Sustainable Energy Fund for Africa (SEFA). The ICA and SEFA are both hosted by the African Development Bank.