The road to COP27: Youth voices for climate justice

The road to COP27: Youth voices for climate justice 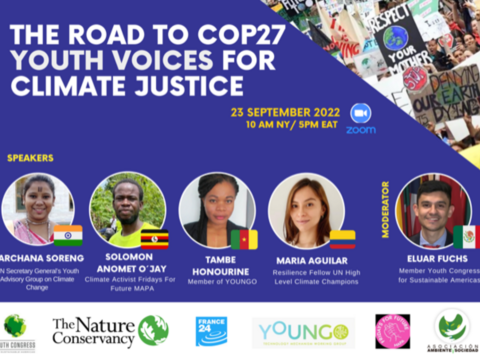 Although the climate crisis is a global problem, its effects vary significantly among countries and populations. The climate crisis disproportionately affects people in already vulnerable conditions, such as youth, women and children, indigenous peoples and local communities, among others, as well as small-island developing states, least developed and developing countries. In short, the climate crisis is a justice crisis, the people and countries who have contributed the least to the problem are in the frontlines, suffering the brunt of its consequences. In the fight for climate justice, young people around the world are advocating for a livable planet and the possibility of a equitable future.

The Paris Agreement has been a major step forward for the climate agenda, COP26 finalized the main rules needed for its operationalization, now COP27 must deliver on its implementation, and young people are uprising, demanding ambitious climate action now!

Both CTCN Youth Knowledge Exchange alumni and the current YOUNGO representative to the CTCN Advisory Board will be presenting in this exciting dialogue session.

Join us to hear youth perspectives about climate justice and the road to COP27.

Language: English with translation to Spanish and French