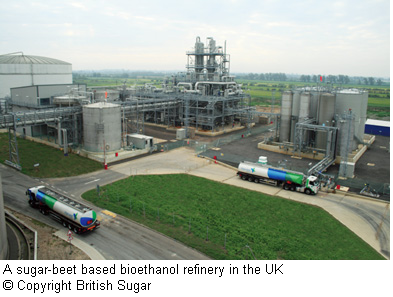 Liquid biofuels for transport have to a certain extent been in use for a very long time. In recent years however, they are enjoying renewed interest in both developed and developing countries as a result of the need to curb rising emissions from the transport sector, reduce dependence on increasingly expensive fossil oil imports and increase farm incomes. An important advantage of biofuels is that they can easily be integrated into the existing transport infrastructure, thus avoiding the significant investment costs associated with other renewable options for the transport sector.

1st generation bioethanol, also known as carbohydrate ethanol, can be produced from sugar or starch based crops. Bioethanol is mostly used in transport applications. It is mixed with gasoline in proportions varying from 5 to 85%. The lower blends are compatible with conventional gasoline engines. Blends above 10% ethanol content are only suitable for use in modified engines. The least complicated way to produce ethanol is to use biomass that contains so-called six-carbon sugars that can be fermented directly to ethanol. If producing ethanol from starch based crops another processing step is required. The two conversion routes are described below:

This conversion route starts by grinding up the feedstock to extract the sugar, which is then added to yeast for the fermentation process. In a closed anaerobic chamber, the yeast secretes enzymes that digest the sugar, yielding several products, including lactic acid, hydrogen, carbon dioxide and ethanol (WWI, 2007). The most common feedstocks include sugarcane, sugar beet, sweet sorghum and other plants containing a large proportion of simple sugars.

Producing ethanol from starch-based crops requires another step in the process called saccharification, which entails breaking the large starch molecules into simpler sugars. There are two main methods for refining starches into sugars, primarily differing in the pre-treatment of feedstock. In the “wet milling” process the grains are soaked in water, usually with a sulphurous acid, to separate the starch-rich endosperm from the high-protein germ and high-fiber husks. In addition to ethanol, the process results in a number of high-value co-products, such as grain oil, gluten feed, germ meal, starches, dextrin and sweeteners. (WWI, 2006)

Production of bioethanol depends mainly on sufficient provision of economical biomass used as feedstock. The production of 1st generation bioethanol (as well as the production of most other biofuels) is limited by the availability of suitable land and water resources and crop yields.

Currently, some 1.6 billion hectares of land area are used as cropland (Fischer, 2008). After excluding forest land, protected areas and land needed to meet increased demand for food crops and livestock, estimates of the amount of land potentially available for expanded crop production lie between 250 and 800 million hectares, most of which is found in tropical Latin America or in Africa (Fischer, 2008). The other source of increased feedstock supply is the increase of yields: intensification of land use through improved technologies and management practices. In most African countries yields are only a fraction of their potential and significant improvement can also be achieved in Asia and most parts of Latin America (even in Brazil, where sugar cane yields are already among the highest in the world) (FAO, 2008). However, yield improvements require significant investment into fertilizers, mechanization and training of farmers to improve agricultural practices.

Production of ethanol through biological fermentation of sugars extracted from sugar and starch crops is a technically mature and commercially available process. However, a number of technical improvements can still be made to several steps of commercial ethanol production routes, e.g. “improved enzymes to convert starch to sugars (hydrolysis), improved bacteria (fermentation), water separation methods, process and plant optimisation, and greater value-added co-products, e.g. development of biorefineries” (IEA Bioenergy, 2009).

Ethanol is mostly used in low to medium blends (5% to 20% blend with gasoline, also referred to as E5 or E20). Higher blends are also available, however they require dedicated or adapted vehicles. Biofuels are generally not yet competitive with fossil fuels, therefore many governments around the world offer special incentives for non-fossil based fuels, or have set obligations to bring biofuels, including bioethanol, to the market. In Brazil, the successful Proalcool ethanol program and the introduction of flex-fuel vehicles, which can run both on ethanol and gasoline, eventually resulted in 2008 bioethanol contributing some 50% of fuel consumption in the gasoline market from sugar-cane ethanol (Pelkmans et al., 2009). In Colombia, as of 2006, there is a mandate the use of 10% ethanol in all gasoline sold in cities with population over 500 000. In Venezuela, the state oil company is supporting the construction of 15 sugar cane distilleries as the government phases in a national 10% blending mandate. In Bolivia, 15 distilleries are being constructed and the government is considering authorizing blends of E25. Costa Rica and Guatemala are also in the trial stages for expanding production of sugar cane ethanol. Argentina, Mexico, Paraguay and Peru are all considering new biofuel programmes as well. In Asia, Thailand has mandated a 10% ethanol mix in gasoline as of 2007, while the Philippines introduced a similar mandate to 5% blend. In India, the sugar industry has been calling for E5 blends which the government means to increase to E10 and eventually E20. In China, the government has made E10 blends mandatory in five provinces. In Africa, efforts to expand production and use of ethanol are under way in several countries (WWI, 2007).

Despite the wide spread interest in bioethanol, production is still highly concentrated. Global production of ethanol as fuel was around 84.6 billion litres (22,36 billion gallons) in 2011. Of that amount, about 87% was produced in Brazil and the United States alone (Renewables Fuels Association, 2012).

Depending on the feedstock used and scale of the plant, production costs can differ significantly. Because of lower average costs, larger plants (of capacity greater than 200 million liters per year) have dominated among new installation. In Brazil, ethanol can be produced from sugar-cane at less than US$0.31/l, whereas the production cost of ethanol from corn in the USA is approximately US$0.75/l and that from wheat in the UK is about US$0.87/l (IEA Bioenergy, 2009).