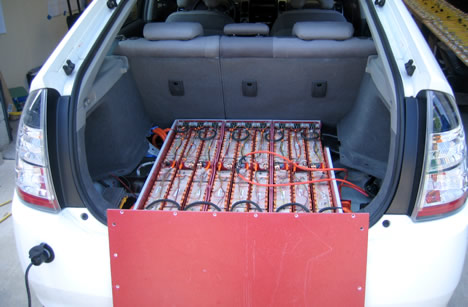 Each technology has its own particular strengths and operational characteristics. For example, pumped hydro is best suited for large-scale bulk electrical energy storage (if suitable geographic topology, geology and environmental conditions exist). Pumped hydro generating stations have been built capable of supplying 1800MW of electricity for four to six hours.

This description focuses on the use of batteries for energy storage. Several different types of batteries are discussed. Batteries can be used for a variety of purposes, each with their own advantages and disadvantages.

Electrochemical batteries are storage media in which reversible electrochemical reactions enable storage of electrical energy as chemical potential and release of that energy on demand.

An electrochemical battery consists of two or more electrochemical cells. These cells use chemical reactions to create a flow of electrons. In other words, the chemical reactions create an electric current. The primary components of an electrochemical battery are the container, two electrodes (cathode and anode) and electrolyte material. The electrolyte is in contact with the electrodes. Discharging of a battery occurs when it is connected to a connected load: electrically charged ions in the electrolyte that are near one of the cell's electrodes supply electrons, which is called oxidation while ions near the cell's other electrode accept electrons, which is called reduction, to complete the process. The process is reversible in order to charge the battery which involves ionizing the electrolyte. An increasing number of chemistries are used for this process. Familiar ones include lead-acid batteries, nickel cadmium and lithium ion batteries (Eyer and Corey, 2010).

There are also some relative disadvantages of flow batteries, including:

Each battery technology has its own unique set of electrochemical reactions, materials, and electrical characteristics.This wide variety of attributes leads to tremendous diversity in battery types and uses. This CTW description will cover two battery systems which are expected to play a particularly big role in utility scale battery energy storage systems:

The Vanadium Redox Battery (VRB) is a flowing-electrolyte battery that lends itself to high capacity, high cycle count requirements necessary for utility-scale transmission and distribution (T&D) electricity storage applications. The battery uses the commercially produced metal vanadium. The VRb is also sometimes referred to as a fuel cell or a reversible fuel cell (EPRI, 2002).

One of the additional advantages of the VRB on top of the advantages of flow batteries in general is that many of the failure modes associated with other batteries are avoided in the simple and elegant VRB electrochemistry. Moreover, the reactions do not require elevated temperatures and there are no electro deposited solids of the active substance (EPRI, 2002).

The VRB is an emerging energy storage technology that is entering the commercialization phase of development. The basic electrochemistry research is essentially complete, and the leading manufacturers have demonstrated full-scale gridconnected systems in Japan, South Africa, and North America. However, true commercial, standardized, volume-produced products are not yet available in the marketplace.(EPRI, 2002).

The Regenesys battery is a polysulfide-bromine flow battery and is also sometimes called a regenerative fuel cell. The system was developed during the early 1990s. While often seen as a redox-like system, Regenesys is not truly a redox system since both the positive and negative reactions involve neutral species (EPRI, 2002). The discharge reaction at the positive electrode is:

and that at the negative is:

The characteristics expected for a 100 MWh/10MW Regenesys energy storage facility are identified by the developer of the technology. For instance, the expected space requirements are 1 hectare (2.5 acres) or less which corresponds to a footprint of slightly less than 1 kWh/square foot. This is not very different from the total site area for a single story plant based on flooded lead-acid cells (EPRI, 2002).

The round-trip efficiency of such a facility is estimated o be around 60-65 %. Higher discharge rates than the nominal rates of discharge will reduce the efficiency to 50-55%. The lifetime of the plant is expected to be 15 years. A performed Environmental Impact Assessment for the technology indicates that a Regenesys plant will be environmentally benign.

Clearly, out of the battery technology systems, only the lead acid battery system has reached full commercial maturity and cost certainty. The other technologies are still under development. At King Island, Australia, a prototype VRB facility has been installed which functions as a back-up to the island's wind farm.

Due to the large variety of battery types, many different functions can be performed. Especially flow batteries, which can be scaled appropriately to the application, have a wide variety of application possibilities. Several of the benefits of these functions are discussed here. In addition, others can be found in the other energy use.

Support the role out and deployment of renewable energy technologies

Battery technology can support the functioning of intermittent renewable energy sources, in this case wind. Especially flow batteries, which can store large quantities of energy are suitable for such large scale applications. The implementation of battery energy storage in wind farms and solar farms reduces the problem of intermittency of the energy source. In other words, the technology can store energy when the demand is low but production is high, and release this energy when production is low but demand is high. This supports the economics of renewable energy technologies. Subsequently, this technology supports environmental protection due to the increased use of renewable energy technologies.

Batteries have the capacity to realize load leveling. Base load plants are more efficiently used when they can generate electricity on a continous basis. Battery technology might provide this option. Currently, at high demand, additional power plants need to be started to cover the additional demand. These power plants are shut down during periods of low demand.

When growing demand for electricity approaches the capacity of a transmission system, transmission providers (wires company) currently add new lines and transformers. Since load grows gradually, new facilities are larger than necessary at the time of their installation, and there is an under-utilization of the new transmission assets during the first several years of operation. To defer the purchase of a new line and/or transformer, a wires company could instead install a battery energy storage plant close to the load center and discharge the energy storage plant as necessary (e.g., shave peaks at the sub-station) to keep from overloading existing transmission assets. The deferral can be made until the load warrants purchase of conventional transmission upgrades (EPRI, 2002).

A variety of loads--ranging from modest industrial installations to substations of significant capacity--require energy to provide power quality and backup power. This energy is used for a variety of conditions such as when momentary disturbances require real power injection to avoid power interruptions. In the case of industrial customers, a local source of power may be required when there is an interruption of power from the utility. This power source may function until the power feed from the utility is restored, until a reserve generator is started, or until critical loads are shut down in a safe manner. In the case of a substation, a variety of momentary disturbances such as lightning strikes or transmission flashovers cause power trips or low voltages. The total energy storage requirement is greater and there may be a need power flow separation to insure continuous power to important customers (EPRI. 2002).

As with all storage technologies, every charge/discharge cycle results in some loss of energy due to system inefficiencies. For typical grid-connected applications, this means that from a global perspective, there may be increased air emissions associated with the generation of this lost energy. Of course, for renewable energy applications, there are no air emissions considerations, and in some applications, the battery technology serves to increase the utilization of renewable sources. In addition, battery energy storage saves resources due to more efficient use of power plants and delays investments in additional transmission infrastructure.

Costs of battery systems depend on the required capacity, both in terms of power as in terms of required discharge times.