Flow-through dams (also known as perforated dams) are constructed solely for the purpose of flood control and mitigation of flood risks in downstream communities and ecosystems. Unlike reservoir dams, which are at built primarily for water storage or power generation, the spillway (opening) is built at the same height as the riverbed level, allowing the river to continue its natural flow in normal conditions. When water levels rise above the spillway, the dam restricts the amount flowing through the opening, decreasing peak flood flow. Since flow-through dams minimally affect rivers natural flows, under normal conditions negative environmental and socioeconomic impacts, such as sediment accumulation, restriction of water flow to downstream communities and ecosystems, and breaching during very extreme flood events, can be minimized or avoided altogether.

The need to reduce the impact of flooding in downstream urban areas along rivers
The need to mitigate bore waves reaching downstream areas of a river due to the collapse of a landslide dam during rainfall periods.

Reduction of flooding impacts in downstream urban areas along rivers.
Mitigation of bore waves that flow downstream from water overtopping at the dam site, due to the collapse of a landslide dam during rainfall.

Overview and Features of Flow-Through Dam for Flood Control

The flow-through dam (also known as "perforated dam") is designed for the sole purpose of flood control, just one of the many possible functions of dams. An opening (spillway) is designed into the dam at about the same height as the river bed, so the structure is intended to let water flow through during normal times. This is different from water reservoir function of dams (a water utilization function) (see figure below). 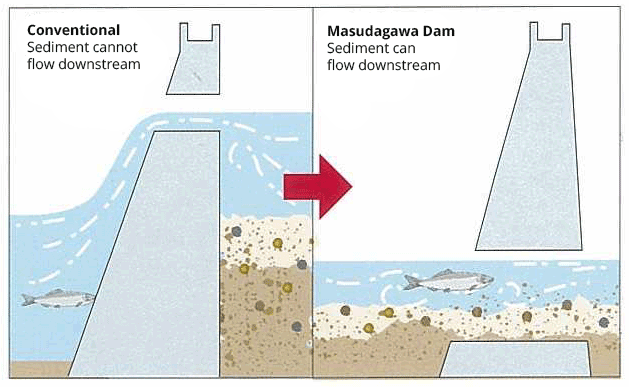 In terms of adaptation, the flow-through dam structure functions to reduce damage to urban areas downstream along the river, by cutting the peak flow of flood waters. Through a similar function, in the case of a bore wave flowing downstream (see note) from the collapse of a landslide dam or due to overtopping at a dam site, the flow-through dam mitigates damage by reducing the power of the bore wave before it reaches the urban area downstream. Note: A bore wave is a phenomenon of a wave surging ahead at a different height than the water level (or water surface).
Because a reservoir dam is for the purpose of water storage, removal of sediment is difficult and there are various environmental impacts such as bad odors due to water quality deterioration. In contrast, the perforated dam, also known as the flow-through dam, has the advantages that sediment removal by heavy equipment is easy to do, and the impact on the environment is small.

Because normally no water is stored in a flow-through dam (in contrast to reservoir dam) it is easy to remove any sediment (heavy equipment required).

The scale and performance of a flow-through dam can vary significantly depending on application, location, etc. Below is one example. 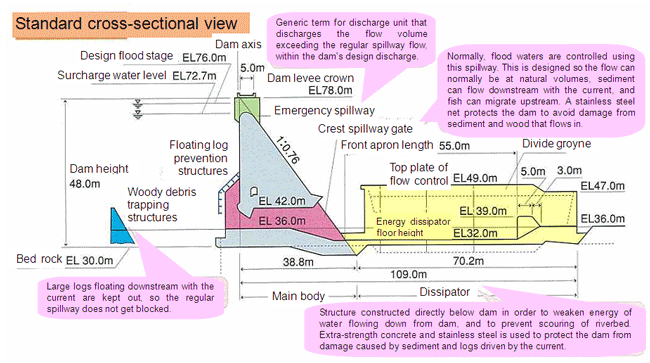 * This adaptation technology brief includes a general assessment of four dimensions relating to implementation of the technology. It represents an indicative assessment scale of 1-5 as follows:
Technological maturity: 1 - in early stages of research and development, to 5 – fully mature and widely used
Initial investment: 1 – very low cost, to 5 – very high cost investment needed to implement technology
Operational costs: 1 – very low/no cost, to 5 – very high costs of operation and maintenance
Implementation timeframe: 1 – very quick to implement and reach desired capacity, to 5 – significant time investments needed to establish and/or reach full capacity
This assessment is to be used as an indication only and is to be seen as relative to the other technologies included in this guide. More specific costs and timelines are to be identified as relevant for the specific technology and geography.

When it comes to building consensus with local residents at the time of construction of the dam, public support/understanding is facilitated by the benefits of disaster prevention and disaster reduction.
No operations are required during regular functioning of the dam, so there is no need for operational technology.
In the future, it is possible to convert this type to a reservoir dam at low cost and over a short period of time, if it becomes necessary to do so due to changes in the supply and demand for water resources, in connection with precipitation changes and the occurrence of drought due to climate change, changes in food demand and lifestyles of residents living downstream, and so on.
The dam does not capture all the sediment, and by allowing it to flow with the current, the amount of sediment accumulating within the dam can be reduced. This is an environmental benefit.
Maintains natural river dynamics. Water with sediment can flow through the spillways, reducing accumulation and maintaining natural sediment flows.
Preserves fish migration routes.
Provides flood control and protection, thus reducing flood damage.
Reduces expenses in post-flood reconstruction and rehabilitation efforts.
Provides recreational benefits.
Opportunities and Barriers

Improving flood control is an important climate change adaptation benefit in areas suffering from high seasonal rainfall variability
The dams generally have a lower level of negative environmental and socioeconomic impacts compared to conventional dams
The dams can be converted to reservoir dams at a relatively low cost in case of major water supply changes
Barriers:

Implementation requires a number of conditions to be met, which are not suitable for all areas, therefore may be limited feasibility in some locations.

The Masudagawa Dam in Shimane Prefecture was built with the purpose of flood control on the main channel of the Masuda River. And the Sasakura Dam was redeveloped with the purpose of a stable supply of vested water intake and to preserve the river environment on the Hata River, a tributary of the Masuda River. The Masudagawa Dam was the first built in Japan solely for the purpose of flood control and with no water storage function during normal times, and has been in operation since April 2006. The Sasakura Dam has been in operation since April 2007. 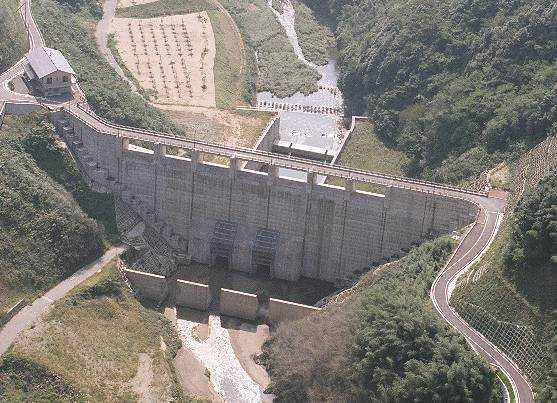 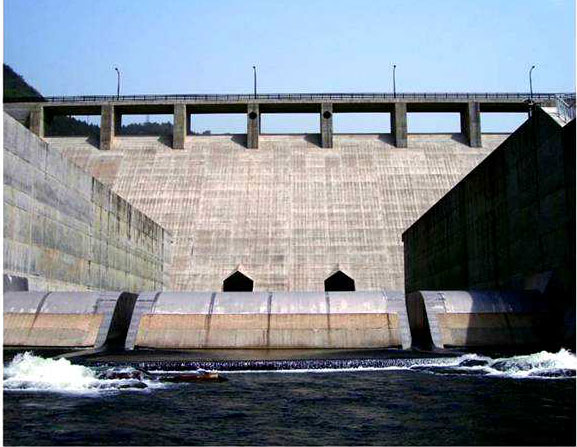