Refrigerators are used in households across the world to store food at a temperature of about 3 to 5 °C (37 to 41 °F) in order prevent it from spoiling. This technology description focuses on refrigerators for residential use and on energy efficiency performance only. It does not take into account potential GHG effects caused by the refrigerant.

Energy efficiency of refrigerators has improved considerably over the past two decades, but room for improvements remains especially in developing countries. Succesful strategies for improving average energy efficiency of a country's refrigerator stock include Minimum Energy Performance Standards and mandatory energy labels linked with financial incentives for consumers.

Refrigerators are used in households across the world to store food at a temperature of about 3 to 5 °C (37 to 41 °F) in order prevent itd from spoiling. Frequently, a refrigerator is combined with a small freezer, where food is kept frozen at below 0°C. Refrigerators are also used in food processing and retailing and other applications e.g. for storing vaccines and medical products.

Technically, the two main types of refrigerators are compression and absorption refrigerators. Most refrigerators today use an electric compressor running on electricity obtained from the grid, and a closed vapor compression cycle with a refrigerant (formerly ammonia or chlorofluorocarbons). The temperature inside the refrigerator is cooled as the refrigeration agent, which is in a high pressure, liquid state vaporizes and absorbs heat from its environment.

Although refrigerators have become considerably more energy efficient over the past two decades, they still account for a substantial share of household electricity use. This share differs significantly between countries, depending on the average energy efficiency of the refrigerator stock and on the amount of other electric appliances used in households. Figure 1 shows that in IEA member countries the share of refrigeration in residential electricity consumption has declined between 1990 and 2000 (IEA, 2003) to about 13%. In the US, it is estimates that today refrigerators are responsible for about 10% of household electricity use (AHAM, 2010). 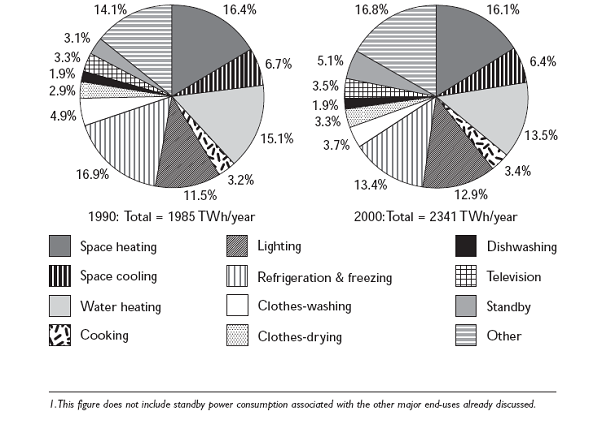 There are different definitions of what qualifies as an energy efficient refrigerator: Energy efficiency may be defined relative to national averages or minimum national performance standards, or as an absolute value, e.g. 400 kWh/year.

Energy use varies depending on the model of refrigerator and on ambient air temperature. Generally, refrigerators with freezers on the top are most energy efficient, followed by models with freezers on the bottom and by ones with side-mounted freezers. Automatic defrosting tends to make refrigerators less energy efficient (Energy Star, 2008). It is also estimated that each 1 degree Fahrenheit variation in the surrounding air temperature leads to a 2.25% to 2.5% variation in energy consumption with energy consumption increasing with higher temperatures (Energy Star, 2008).

Major barriers to the uptake of energy efficient refrigerators include

Over the past 2 decades, there have been major improvements in the energy performance of refrigerators. In the US for example, today’s refrigerators use about 60% less energy than 20 year old models (AHAM, 2010). For Mexico, it is estimated that refrigerators which were sold between 1995 and 2000 consumed 30% more electricity than those of the same size sold between 2001 and 2007. Refrigerators sold before 1980 consumed 60% more than the latest models (Arroyo-Cabanas, 2009). In developing countries, energy efficiency of refrigerators is often lower than in the developed world, especially if there is a significant market for 2nd hand inefficient models or if efficient models are not available of significantly more expensive. In Mexico, for example, it has been observed that in the States of Tlaxcala and Durango, where average personal or family income are greater than in other parts of the country, electricity use for refrigeration is lower, probably because people can afford to buy new and efficient refrigerators (Arroyo-Cabanas, 2009). 2nd hand (energy inefficient) refrigerators from Europe have traditionally been exported in large numbers to Africa. It is estimated that as many as 3 million refrigerators may have been sold from Europe to Africa (UN Foundation, 2007). In a study on transforming the Ghanaian market for appliances, for a sample of about 100 refrigerators in residences in Ghana’s capital Accra, Essel et al (2006) estimate an average annual energy consumption of refrigerators of 1140 kWh/year, which is very high when compared with developed country figures.

In addition to ongoing technical improvements in the performance of the latest appliance models, there remains considerable potential for increasing the average energy efficiency of the refrigerator stock in many countries. Successful strategies for realizing the potential for energy efficiency gains in residential refrigeration include demand and supply-side interventions such as:

MEPS and mandatory labelling programmes for refrigerators and other electrical appliances have proven to be highly effective. To increase their impact it is recommended that governments pay attention that performance requirements are kept at appropriate levels compared to the pace of technological developments, that the standards are rigorously enforced (Ellis, 2007).

In many situations, the purchase of an efficient refrigerator will lead to cost savings over the life-time of the product.

In a recent study on the economics of refrigerators and freezers with an energy efficiency label in the Brazilian market, Cardoso et al (2010) found that for cash purchases there was an economic benefit for consumers under all of the circumstances considered, which included a high and a low electricity tariff and higher and lower ambient air temperature. For consumers subject to a low electricity tariff and in colder areas, who purchase a refrigerator on credit, the study concluded that it’s more economically to buy the less efficient product. For the US, calculations done by EnergyStar (based on default values using average retail prices of EnergyStar certified and non-certified refrigerators, and data for unit energy consumption of products complying to minimum EnergyStar standards and to minimum federal standards) conclude that the payback times for the higher initial investment for the EnergyStar certified model are relatively short, ranging from 2.0 to 2.8 years (EnergyStar, 2009).