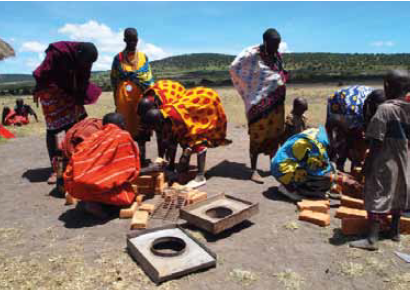 The Maasai Stoves and Solar Project sets a benchmark in stove projects: it transforms lives. The stoves are designed by women themselves, who love them! A spot check after one year showed 100% of stoves in use. Each stove annually relieves three tonnes of wood from a woman’s back and releases 12 hours of labour a week: time freed-up for farming and children‘s care and education. The stoves produce 90% less smoke than traditional 3 stone fires Fireboxes are made locally and the stoves are installed by teams of trained women. No other organizations are working with the Maasai on sustainable energy projects; the need is great and the solutions offered are widely appreciated.

Each stove saves 3.6 metric tonnes of CO2 emissions/year. This has been substantiated and validated through tests by an UN-Designated operational entity. The amount of wood used is reduced annually from five to three tonnes per household. This has a great impact locally too; in Tanzania 96 % of biomass is non-renewable.

The Project involves women throughout the community, and begins by using their stove design. The Project also employs women to install the stoves, while training and empowering them. One project participant said „We used to think only men could do this work; now we know we can do anything!“ Inspired by their roles in the Project, they have established a women‘s organization, stating, „We love the work and the feelings of new power and freedom. We have formed this group so that we can determine and achieve our own goals.“ The women have more time, more energy and healthier lives. The stoves and chimneys bring clean homes. “If there is an average of five children in a household, and if all causes of severe respiratory disease were removed in fifty households, then one child’s life would be saved.” Installing solar systems further helps everyone, particularly with education. Where micro-grids are installed in bomas (homesteads), the homes run a refrigerator and a laptop, which the woman of the house is trained to use and with which she can teach her children.