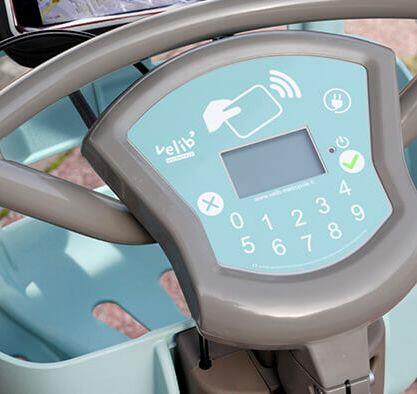 Vélib' is a large-scale public bicycle sharing system in Paris, France. Launched on 15 July 2007,  the name Vélib' is a portmanteau of the French words vélo (English: "bicycle") and liberté ("freedom").

Vélib' is operated as a concession by the French advertising corporation JCDecaux.  As of 2014, Vélib' is the world's 12th-largest bikesharing program by the number of bicycles in circulation; the rest of the top 18 are in Chinese cities. As of July 2013, Velib' has the highest market penetration with 1 bike per 97 inhabitants. Since December 2011, Vélib’ has been complemented by Autolib', an electric car sharing scheme operating on similar principles.

The Vélib’ Métropole service aims to further the development of new forms of travel across the Île-de-France region that operate alongside existing transport options. Moving around is made much easier thanks to a fleet of bicycles which is 30% electric: Vélib’ users see their journeys shorten and defy the city's hills to climb them with ease. With a range of 50km and a top speed of 25km/hour, the electric Vélib’ bicycles represent a genuine alternative to the use of private cars that pollute the atmosphere.

In order to use the system, users need to take out a subscription, which allows the subscriber an unlimited number of rentals. Subscriptions can be purchased at €1.70 per day, €8/week, €29/year (Vélib' Classique), or €39/year (Vélib' Passion). With a subscription, bike rental is free for the first half hour of every individual trip; an unlimited number of such free trips can be made per day. A trip that lasts longer than 30 minutes incurs a charge of €1 to €4 for each subsequent 30‑minute period. The increasing price scale is intended to keep the bikes in circulation. A Vélib' Passion subscription allows the user to have the first 45 minutes free on each trip, its price is reduced to €29 for users aged under 27, and to €19 for students receiving a scholarship.

Velib system in Paris encompasses around 14,500 bicycles and 1,230 bicycle stations, located across Paris and in some surrounding municipalities, with an average daily ridership of 85,811 in 2011.