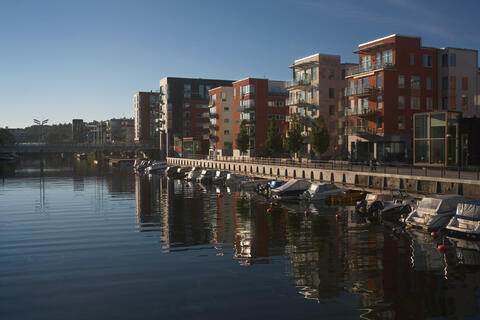 In the early 1990s, Hammarby Sjöstad had a reputation for being a run-down, polluted and unsafe industrial and residential area. Today, Hammarby Sjöstad is one of Stockholm’s most attractive residential districts and a model of successful urban renewal. Sustainability was one of the primary focal areas in the design and planning of Hammarby Sjöstad. The ambitious sustainability goals were integrated into the planning process from the initial phases. Sustainable alternatives for managing water, energy and waste were carefully studied from the architectural and infrastructure design stage. The district is the product of a positive collaborative process between municipal authorities, urban planners, developers, architects, landscape architects, eco-tech businesses, the energy company Fortum and Stockholm’s municipal water company.

<h2> Renewal in every sense of the word </h2>
The district of Hammarby Sjöstad covers more than 200 hectares. The mix of apartments, shops, offices and small traders, with a focus on culture and entertainment, gives Hammarby Sjöstad an inner-city atmosphere, despite being located outside central Stockholm. Together it represented a vast renewal that transformed an old industrial area into one of Stockholm’s most attractive neighbourhoods. And renewal was also a common theme in the sustainable planning, with environmental solutions such as the following:
• All the electricity used comes from renewable sources.
• Testing of new types of fuel cells, solar PV and solar thermal panels.
• Energy from the purification of wastewater is used for district heating and cooling.
• Biogas is extracted from sewage sludge and food waste and used as vehicle fuel.
• Digested sewage sludge is used as fertilizer.
• Combustible waste is used for district heating and electricity.
• Rainwater run-off from streets is purified locally to reduce the load on the sewage treatment plant.

<h2> Positive environmental and economic impact </h2>
Hammarby Sjöstad shows that an urban district can be built with a far lower environmental impact than traditional projects, as the following facts prove:
• The environmental impact is 30–40% lower than for a typical district built in the 1990s.
• Car use is 14% lower than in comparable districts in Stockholm.
• Daily water use is 150 litres per person, compared with 200 litres per person in the rest of Stockholm.
• When the lakeside town is complete, half of the energy needed for the district will be produced locally.