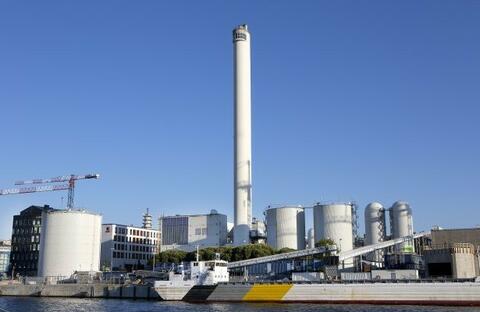 In central Stockholm, you find one of Europe’s largest district heating and cooling systems. Close to 90% of the city’s buildings are connected to the district heating network, which uses several innovative energy sources, such as excess heat and wastewater. Stockholm Exergi is responsible for heating and cooling production in the region of Stockholm. The district heat distribution network has a length of 3,000 km, and after the last coal-fired plant in Stockholm was closed down in April 2020, the heat supply system is primarily based on renewable energy sources such as biofuel and waste from households and industries. With several innovative solutions, Stockholm has continuously improved the system’s sustainability and low climate impact.

<h2> Seawater district cooling facility </h2>
The first heating plant was connected to the district heating network in Stockholm at the harbour Värtan in 1969. The district heating network has since then been expanded to include both heating and cooling, and is today one of the world’s largest sea water based facility. In the summer, the freezing cold water from the bay is primarily utilised for the cooling network. In the winter, heat pumps are used instead.

Since the Hammarby plant started its operation in 1986, emissions of sulphur oxide and dust in the air over Södermalm have dropped by two thirds, thanks in large part to the fact that many property owners have switched from individual heating to district heating. The continuous development of new solutions within the district heating system makes Stockholm an example of how coal can be replaced with renewable sources to heat and cool entire cities.