With a module that’s twice as efficient as conventional silicon photovoltaic systems, this power generation system by Sumitomo Electric Industries, Ltd. is designed for high solar radiation (DNI >6.5) and high-temperature areas. Solar panel installation occurs high above the ground in order to offer usable space below the panels. This space-saving feature is just one of the reasons why the CPV system is on tap to become the next-generation photovoltaic generator. 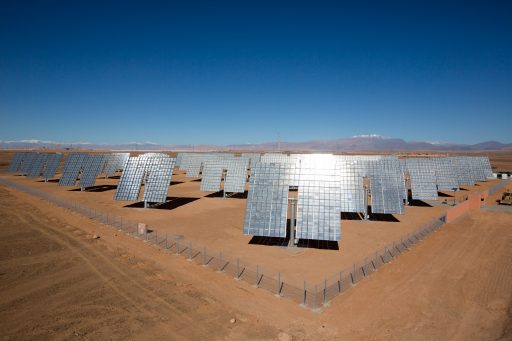 I. High Conversion Efficiency
The conversion efficiency for one module is twice that of a standard silicon solar module. This is achieved through tracking of the sun and through the use of special lenses that direct that sunlight into a high intensity – hundreds of times higher than traditional systems in fact. The compound semiconductor cells used in this CPV system has a high conversion efficiency of 40 to 50 percent.

II. Thin, Lightweight Design
Sumitomo’s CPV modules are thin and lightweight, decreasing manufacturing and operational costs of the solar tracker that forms the foundation of the modules. Additional costs are lowered as well, from the freight cost to the on-site installation cost. As the result, a total cost is reduced during and after construction of the power generating system.

III. Stable Power on a Daily Basis
Featuring an efficient use of sunlight from sunrise to sunset, the CPV module sits on a two-axis tracker that automatically adjusts the solar zenith angle, i.e., elevation, and the solar azimuth angle, i.e., direction.

IV. Effective in Many Applications
Sumitomo’s CPV is effective in both high heat and high solar radiation. That’s because the conversion efficiency of the semiconductor cells is not highly dependent on the ambient temperature. In turn, efficiency remains stable and does not decline. Compare this to silicon solar cells in which a decline is recorded.

V. Inclusion of Advertisements
Companies that purchase Sumitomo’s CPV for use in their plant, region or community can display project logos, letters and messages on the module without a decrease in power output.
Maintenance training on Sumitomo Electric Industries, Ltd.’s CPV power generation system is available to local engineers.

This power generation system is suitable for high solar radiation (DNI >6.5) and high temperature areas. The module of this system is approximately twice as efficient as conventional silicon photovoltaic systems. With the solar panels installed high above the ground, the system provides usable space below the panels. The CPV system is expected to become the next-generation photovoltaic generator.

The CPV system uses compound semiconductor cells with a high conversion efficiency of 40–50%. This system generates electricity by tracking the sun and using lenses to concentrate direct sunlight into an intensity hundreds of times higher. The conversion efficiency for one module is approximately twice that of a standard silicon solar module.

Sumitomo Electric CPV modules are thin and lightweight, which helps reduce the cost of the solar tracker that supports the modules, as well as the freight cost and on-site installation cost, thus contributing to a total cost reduction when the power generating system is constructed.

The module is mounted on a two-axis tracker that can adjust the solar zenith angle (elevation) and the solar azimuth angle (direction), enabling efficient use of sunlight from morning until evening.

As the conversion efficiency of the semiconductor cells has little dependency on temperature, the efficiency does not decline, compared to silicon solar cells. The CPV system is therefore particularly effective for power generation in areas of high temperature and high solar radiation.

Project logos, letters, and messages can be displayed on the CPV module without a drop in generated power output. 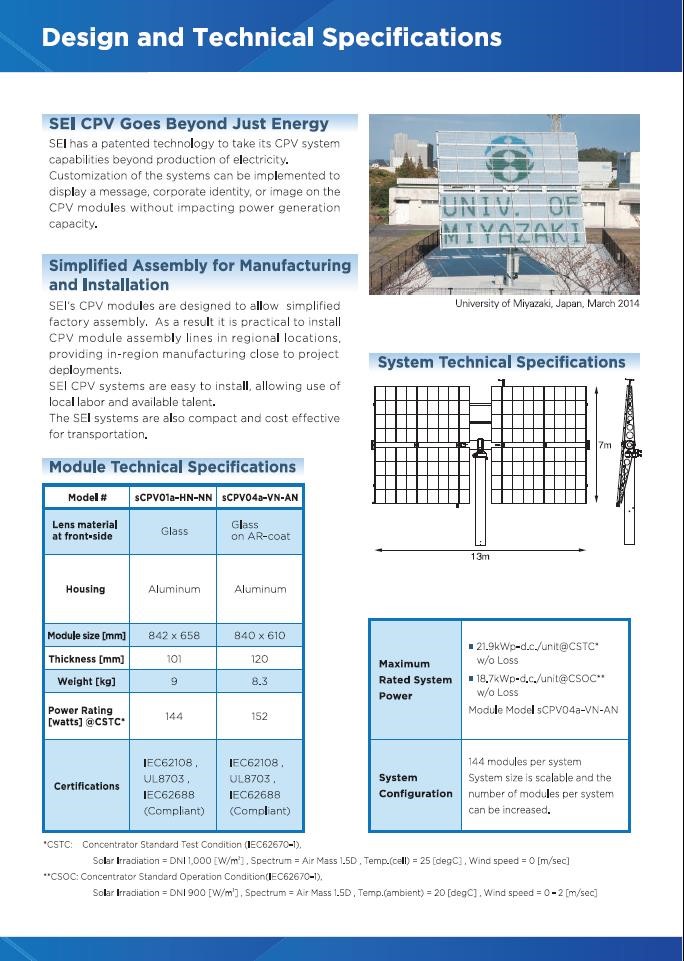 Past installation records of CPV modules are as follows:

Constant maintenance is essential for keeping the CPV system operate safely. We plan to provide maintenance training to the local engineers, but if the recommended maintenance services are not achieved, there will be a risk of significant problems.