Power Router, or PR for short, directs the flow of electricity flow from one cluster of energy Producers and Consumers (ProSumers) to the other autonomically. PR is the technology behind ECONETWORK, which is a network of ProSumers that allows communities to produce and consume energy with or without connecting to the grid.

PR is comprised of a battery and two inverters, and handles any shortage or excessive transfer of electricity in clusters without the need for costly telecommunication lines. One inverter controls one cluster's frequency and voltage, while the other controls the inter-connection of two clusters depending on the frequency difference. A simple yet revolutionary method, any type of generator can be applied to ECONETWORK. 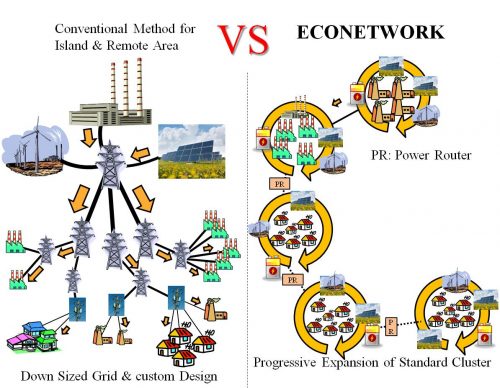 ECONETWORK, a relatively new electric distribution application, allows for the widespread availability of renewable energy sources. When a renewable energy source is installed individually, such as in the case of solar panels on roofs, it can cause a reverse tide flow to the grid, which is very expensive to deal with.

If renewable energy sources are deployed as a group or cluster, as in the ECONETWORK concept, this reverse tide flow can be controlled easily. ECONETWORK has the unique ability to start off in a small unit and grow incrementally from there. This progressive expansion of standardized clusters using PR can significantly reduce the cost and complexity of energy use, particularly where there are little to no transmission and distribution lines.

This is VPEC’s solution for creating a low carbon society's architecture.

I. Cost Efficiency
The above-mentioned clusters can be added one by one for expansion, thus cutting the cost of initial investment significantly. Also, because just the excess and shortfall of electricity is transferred, there is a 60 percent reduction in initial investment for transmission and distribution lines as compared with conventional grid.
Standardization means it can be used in many different situations and under many different conditions so as to become available over many areas.

II. Energy Efficiency
Energy efficiency is boosted by five percent thanks to the decrease in volume in energy transfer, with an increase of 15 percent with the involvement of the consumer.

lll. More Control
When the grid is paired with ECONETWORK, it can better control unpredictable residential demands as it sends the off-peak power to the ECONETWORK battery. As a result, the peak demand periods are reduced, as are the reserved capacities. In addition, when the technology uses Direct Current, efficiency improves by 10 percent or more when standby power is reduced.

lV. Easy Installation
Because the system works in tandem with existing equipment, it’s easy to procure and easy to install.

Power Router, PR, controls the electricity flow from one cluster (ProSumers = Producer & Consumer) to the other cluster autonomically.
PR is the key technology in ECONETWORK which is an acronym for Electricity Cluster Oriented NETWORK, ProSumers network.
PR is consisted of two inverters & battery, and accommodates the excess & shortfall transfer of electricity among clusters without expensive telecommunication lines. One inverter controls one cluster’s frequency, related to the State Of Charge, SOC, of battery, and the other controls interconnection of two clusters based on the difference of frequency. This is a very simple but very innovative method, which is covered by intellectual property right.

ECONETWORK is a new architecture for electric distribution which makes the massive deployment of Renewable Energy Sources, RES, available. RES deployed as a point, such as Solar Photovoltaic on the roof, causes the reverse tide flow to GRID, and the counter measure for it is very costly.

ECONETWORK deploys RES as a group, cluster, and doesn’t cause the reverse tide flow to GRID. It can start in a small unit and expands progressively. The progressive expansion of standardized cluster using PR can achieve significant cost reduction & expandability, and thus reduce cost & complexity of electrification, especially where transmission & distribution line is not sufficient. So, we can build the low carbon society available in shorter time, by utilizing this technology.

The combination of GRID/POOL with conventional synchronous generators and ECONETWORK with renewable energy sources is the solution for the low carbon society’s architecture.
Any kind of generators can be applicable to ECONETWORK

The pioneer of architecture proposal beyond the framework of GRID, and the “ProSumers’ excess & shortfall transfer concept has been patented.
This technology realizes electrification of rural areas with lower costs because of the following two factors:

GRID & ECONETWORK combined in urban areas gives a total optimization. By clustering consumption and reducing the energy transfer, GRID can have more capacity and lower CO2 emission.
Consumers can have their own electricity under massive black out, which is a great energy security.
Consumers can have more stable cost under ECONETWORK than under GRID, which has to be influenced by the cost of fossil fuels and so on.
Consumers can know what is available to them real time, thus they can control the consumptions by their will.
This system is a new combination of existing equipments, which leads to easy procurement and easy installation.

ECONETWORK is a flat & loose network of clusters of “ProSumers” and is different from conventional rigid GRID.
Only excess & shortfall of electricity is transferred, thus 60% less on initial investment on transmission & distribution line.
Energy efficiency can be improved around 5% by the reduction of volume in energy transfer and 15% by the consumers’ involvement.
Networking those micro-GRIDS with 50% or more of RES, we can achieve the equivalent quality to GRID, and CO2 emission reduction level, which cannot be achieved under GRID.
GRID becomes more efficient by utilizing ECONETWORK; making unpredictable residential demands to well controlled one; putting the off peak power to the battery of ECONETWORK and reducing the peak demands; reducing the reserved capacity; operating the most efficient mode, etc.
Utilizing Direct Current, 10% or more efficiency improvement can be achieved through the reduction of standby power.

Computer Simulation with Waseda University showed that the concept worked as is designed.
Laboratory test of twin inverters function has been conducted with Osaka Gas & Waseda University resulted in proving the concept & simulation.
Single cluster field test to relate SOC to the cluster’s frequency under the real load has been successful in Minamata. Power Router software developed by Waseda, Osaka-Gas & VPEC has worked very well.

The failure of standardization may cause the higher cost than expected especially in battery.
Inverters are utilized significantly, and the cost & performance of power devices may impact this system’s competitiveness.