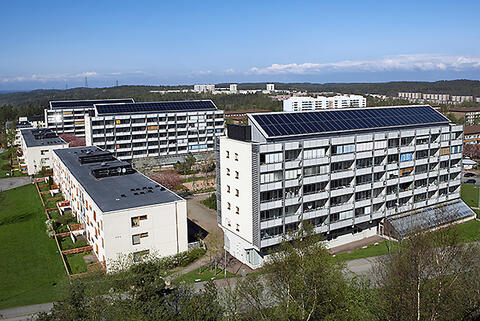 Gårdsten in Gothenburg shows how innovation, persistence, commitment, cooperation and participation can turn things around in a troubled urban district. Since Gårdstensbostäder was founded in 1997, crime has halved and 1,500 new homes with various forms of tenure are being built. Gårdsten has become something of a model for smart community development, and both Swedish and foreign visitors regularly come to study this recipe for success. Gårdsten has gone from being a troubled city district to being a highly appreciated and attractive development, gaining much attention and raising a few eyebrows in the process.

<h2> More than one-third of apartments empty </h2>
Gårdsten, in north-eastern Gothenburg, was built between 1969 and 1972, with around 2,200 municipal apartments. The district later underwent a change and became one of Sweden’s most run-down, unsafe areas with high crime and unemployment rates, as a result of which people started moving out of the area. In 1997, when municipal housing company Gårdstensbostäder was founded, more than 800 of the 2,200 or so apartments were empty.

<h2> Emphasis on social sustainability </h2>
Gårdstensbostäder had a clear remit from the municipality when it was founded; to reverse the trend in Gårdsten. The owner’s directive included adopting a long-term approach to sustainability in three dimensions: social, ecological and financial, with an emphasis on social sustainability for the entire district. A key aspect was that Gårdstensbostäder should be located in Gårdsten to facilitate real influence from and engagement with tenants, increase safety and design measures to create jobs.

<h2> Sustainable modernisation </h2>
The district was also modernised through a number of sustainable solutions, with both environmental and economic effects, and, not least, the impact of boosting the attractiveness of and pride in the area:
• Solar PV and thermal panels on the three Solhus buildings produce 780 MWh a year of electricity and heat.
• Some apartments have greenhouses and composters that turn household waste into topsoil.
• Half of the energy for the properties comes from a wind turbine, located on one of Gårdsten’s hills and built in cooperation with Gothenburg’s energy company.
• Individual metering of water, electricity and heating consumption save 25 kWh of electricity and 1 cubic metre of water per square metre per year. The residents have been leading this issue and are now saving money.
• The 100 new washing machines installed in 2014–15 were the first in Europe to be heated by district heating, which means they use up to 80% less electricity.
• The tenants can join Gårdstensbostäder’s carpool and rent an electric car. The cars are charged using electricity from the Solhus solar panels and the wind turbine.