wastewater derived from daily preparation and consumption of foods contains a lot of fats, oils and grease (FOG). FOG has been increasing proportionally by the world population growth and it has caused a serious
pollution on rivers and seas.
FOG normally exists as small lumps on a surface of wastewater. In general, 60 tons of wastewater are required to purify a 200ml cup of FOG.

1) Technique for the perfect separation and collection of FOG from wastewater.
2) Reforming technique of collected FOG in a new bio fuel for an electricity generator. 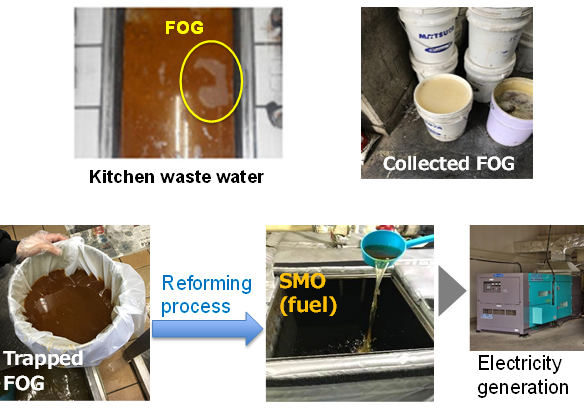 Our FOG-green power generation system exploits the potentiality of FOG, which is one of the most serious causes of environmental pollution.

Not only in emerging nations but also in developed countries, FOG flowing into rivers and seas heavily contaminate them by pollution substances. Our FOG-green power generation system exploits the potential of FOG, which is previously disposed as a waste. Today, unexplored resource can help to achieve the 5 objectives of SDGs:

Collection of FOG from wastewater should be conducted at first. If a grease trap or a wastewater pit are already installed, FOG is easily picked up by hands. Also, installation of such facilities can be prepared by local shops in developing countries. Moreover, TBM Co., Ltd can offer the automatic grease trap system, called “Kankichi-kun Jr.”.

With our introduction of the system, the following 5 benefits can be obtained especially in a densely populated territory such as urban settlements, residential areas, tourist villages, shopping malls, food factories, etc.:

1) Optimize the functioning capacity of water and wastewater networks.
2) Safeguard from the pollution of rivers and seas.
3) Eliminate olfactory pollution.
4) Improve the hygiene of the environment.
5) Incentivize a sustainable tourism.

Furthermore, our FOG-green power generation system will create many employment opportunities in every phase of business. For instance, collecting FOG, operating and managing a biomass power plants, etc.

※Notes
This reforming technology can be applied for a variety of FOG. Even though, utilizing palm oil might be an issue due to its chemical property. If you would like to treat FOGs mixed with palm oil, technical instruction and consultation by TBM Co., Ltd. is mandatory.

The biofuel for FOG-green power generation system is called Straight Mixed Oils (SMO). The chemical property of SMO completely differs from BDF in the following points:

1) Throughout the production of SMO,
・No chemical synthesis and chemical additives are used.
・No harmful by-products (ex. glycerol)
Residual sludge are recovered and can be utilized as resources for methane gas (via fermentation reaction) which can be also burned for power generation.

Generally, by reforming 1 ton of FOG collected, 600L of SMO can be recovered (recovery rate: approx. 60%).

According to the calculation by the National Institute for Environmental Studies in Japan, 20 gigawatt-hour (GWh) are generated from 10,000 tons of FOG, resulting 30,000 tons of CO2 are reduced.

TBM Co., Ltd. has been planning to apply this technology for a large number of stores located in Tokyo and neighboring prefectures. It can be estimated that 110kt/year of FOG collected produce 70kt/year of SMO, which generate 280 GWh/year of electricity. This synergetic effect could be equivalent to the reduction of 370kt-CO2 emission, by decreasing the organic load to sewage plants and the amount of petroleum consumed for thermal power generation.

If our FOG-green power generation system will be introduced, we can reduce urban and industrial wastes, organic loading rate in sewage water and create green energy.

2) Management and control of wastewater treatment in more than 400 restaurants, hamburger chains etc. in the Tokyo metropolitan area.

3) From 2016 to 2017, under the auspice of NEDO, we have executed the project “Locavorism of green energy” in the Musashino municipality, Tokyo. Our FOG-green power generation system was introduced to 160 stores in the commercial district of the municipality. In this area, FOG was collected which was equivalent to 47GWh of electricity per year.

4) We are proceeding the installation of our green power plants in various municipalities: Yokohama city, Tokorozawa city and Toshima-ku of metropolitan Tokyo.