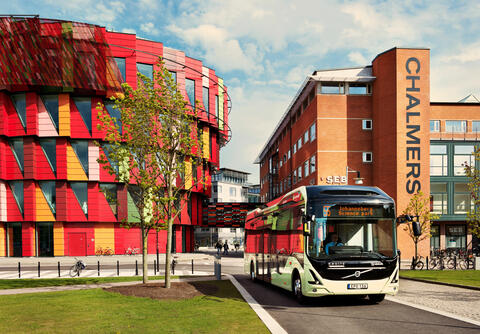 Tomorrow’s sustainable transport is well underway in Gothenburg. The city is launching a bus route with emissions-free vehicles powered by renewable electricity and an all-electric ferry offering quick, low-carbon public transport over the city’s river. ElectriCity in Gothenburg, Sweden, is an exciting collaboration and demonstration arena in which industry, research and society develop and test electrified solutions for tomorrow’s transportation of people, goods and waste. This demo arena comprises projects involving the testing of quiet, exhaust-free buses, ferries and heavy vehicles, all powered by renewable electricity. Using electric power in public-transport systems helps to mitigate problems such as noise and poor air quality, as well as cutting energy consumption and the carbon footprint of transport.

<h2> Trials lead to permanent electric bus route </h2>
Trials of electric buses were conducted on route 55 and part of route 16 (EL16) between 2015 and 2020. The project included three all-electric buses and seven electric hybrids operating on route 55 and connecting Chalmers University of Technology with Lindholmen Science Park via 13 stops, some located in central Gothenburg. The trip took approximately 25 minutes. On one part of route 16, connecting Chalmers and Lindholmen and further stops, two all-electric articulated buses were used, carrying up to 135 passengers each.

The electric buses on route 55 and 16 were powered entirely by renewable electricity, which resulted in a very small carbon footprint. The test period ended in December 2020 and the results have led to the electrified bus routes becoming permanent, with 157 electric buses set to operate in regular traffic in the Gothenburg area.

<h2> From diesel to all-electric ferries </h2>
With the mission to be a model for future clean urban development, a new electrically powered ferry started transporting passengers over the Göta River that runs through Gothenburg in 2019. Gothenburg’s existing shuttle ferries on the river are powered by diesel-electric engines, which only allow them to operate on short routes across the river. ElectriCity’s Volvo Penta-powered electric vessel is the first all-electric ferry in the city that is able to complete longer, multi-stop routes along the river and ultimately incorporate quick-charging capabilities.

<h2> A collaborative partnership </h2>
Gothenburg’s ElectriCity partnership is a collaboration between industry, universities and local government. It involves developing, testing, demonstrating and evaluating solutions that will contribute to the establishment of attractive new sustainable transportation systems and create opportunities for future travel, the transportation of goods and urban planning.

Below, you can watch a clip about an electric refuse truck (in Swedish).